Male:
Necktietchi (ねくたいっち Nekutaitchi) is a male adult Tamagotchi character that debuted on the Chou Jinsei Enjoi Tamagotchi Plus in Japan and on the TamaTown Tama-Go internationally.

Necktietchi has yellow skin. He has a bit of flat, zigzagging hair on top of his head, big oval-shaped eyes, and a pink beak. He wears a large blue tie. In the anime, he has blue irises.

Necktietchi is very good at flattering and appeasing people. When times get tough, he sometimes cries when he is alone. When he gets drunk, he wears his tie around his head (like a headband) and has fun stupidly. He is depicted as being a street person in the anime.

When speaking, Necktietchi has a verbal tic and always says tie (たい tai) at the end of every sentence.

Necktietchi usually appears as a background character. He is often used as an breakout character. Episode 88 reveals that he is currently dating Agetchi. He is voiced by Furushima Kiyotaka.

Necktietchi appears in episode 50, when the girls are singing Happy Happy Harmony.

Necktietchi's name comes from the word "necktie", which refers to the necktie that he wears. 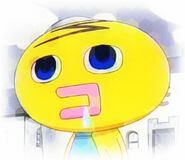 Retrieved from "https://tamagotchi.fandom.com/wiki/Necktietchi?oldid=95516"
Community content is available under CC-BY-SA unless otherwise noted.