Neliatchi is a female Tamagotchi character who first appeared in My Tamagotchi Forever. She was the winner of a character creation contest held several months prior to the release of the game in January 2018, making her official debut in the 2.0 update, which went live August 28, 2018. Her first debut on a virtual pet was on the Tamagotchi Pix.

"Nelia" is the diminutive form of the Spanish name "Cornelia", meaning "horn".

Neliatchi has white skin and oval black eyes with two eyelashes and hexagonal white gleams on each eye. Her hair is very long that hangs below her waist, colored green, and has an isolated leaf-like side-swept fringe on her hairline.

Her main apparel consists of a pink bodysuit, a green vest with a yellow gem brooch, and two pink tropical flowers decorated on her hair, one on each side.

An energetic Tamagotchi, Neliatchi spends most of her time exercising and enjoys playing video games and the piano in her downtime. Tending to her beautiful, long hair is an important daily ritual for her.

Her profile on the Tamagotchi Pix website states: "Neliatchi loves nature, especially plants and ore. She has a lot of hobbies and very active personality. Everyone loves her beautiful long hair which she takes care of every day."

Neliatchi appears as a raisable character on the Tamagotchi Pix. At present, the requirements to obtain her are unknown.

Neliatchi made her debut in My Tamagotchi Forever in a late August 2018 update as a new adult stage Tamagotchi character, evolving from teenagers fed a diet primarily consisting of snacks and vegetables. 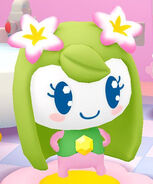 Retrieved from "https://tamagotchi.fandom.com/wiki/Neliatchi?oldid=104736"
Community content is available under CC-BY-SA unless otherwise noted.