Nemutchi is light purple with half-lidded eyes. He wears a floppy red nightcap with a yellow star on the front, and a tiny white ball at the end.

Nemutchi sleeps more than almost any other Tamagotchi character. He is lazy and can never seem to get things done. Even when something surprising happens, he is too sleepy to do anything about it. The only thing that can properly wake him up is hot tea, which is why HotTeatchi is the perfect match for him.

Nemutchi is a bad care character. He is obtained on even generations by giving four or more care misses to Kikitchi.

Nemutchi is a minor character. He is often seen sleeping, and he sometimes falls asleep before finishing sentences. He is a student at Tamagotchi School. In The Great Chocolate Scramble!, he was Kuromametchi's partner when they were trying to find chocolate, and he ended up slowing them both down. In Cool! Lovelin on Ice, he was Lovelin's ice skating partner, and he seemed to be quite skilled at ice skating.

Nemutchi is a student at DoriTama School, and he is on the school's soccer team, known as the DoriTama Eleven. In episode 12, he and the other DoriTama Eleven students compete against Motetchi's team.

Nemutchi is coined from the Japanese word "nemui" (眠い) which means sleepy, hence explains his sleepy features (bedtime hat, lazy eyes and such). 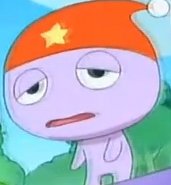 An anime screenshot of Nemutchi

Nemutchi using a special move, "Head In the Dream", during a soccer game

Add a photo to this gallery
Retrieved from "https://tamagotchi.fandom.com/wiki/Nemutchi?oldid=89507"
Community content is available under CC-BY-SA unless otherwise noted.