Female:
Nijifuwatchi (にじふわっち Nijifuwatchi) is a female adult Tamagotchi character who debuted on the Tamagotchi m!x. Her hometown is Rainbow Hills.

Nijifuwatchi's name comes from niji (虹), meaning rainbow, and fuwafuwa (フワフワ), an onomatopoeia word for "fluffy" or "floating" (like clouds).

Nijifuwatchi has a white fluffy body with pink wings. Her head is shaped like a cloud, and her torso has a dress-like appearance. She has two short fluffy pigtails and curly bangs on her forehead. She has drop-shaped eyes with four eyelashes each and pink cheeks. The top of her head has pink, yellow, and blue stripes on it, which resemble a rainbow. She wears a yellow star-shaped clip on the left side of her head. Nijifuwatchi floats a short distance above the ground.

Nijifuwatchi is obtainable in the first generation from a female teen by having 4-5 care mistakes or by feeding the Cream Puff snack 5+ times. She can also be encountered, befriended, and married at Tama Resort Hotel. In the Sanrio version she is found at Twin Stars Land instead. Her favorite items are:

Nijifuwatchi made her first (and so far only) animated appearance in the short film Tamagotchi Movie: Big Secret Delivery Operation!, where she helps Mametchi and his friends deliver an egg. She is the only Tamagotchi originating from Tamagotchi m!x to have appeared in the movie. 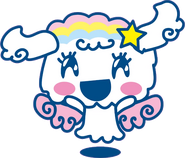 Tamagotchi m!x of Nijifuwatchi, Kuchipatchi, and a child featuring traits of both.

Nijifuwatchi as she appears in Eiga Tamagotchi: Himitsu no Otodoke Dai Sakusen!

Retrieved from "https://tamagotchi.fandom.com/wiki/Nijifuwatchi?oldid=104656"
Community content is available under CC-BY-SA unless otherwise noted.