Nyatchi looks like a kitten with yellow cheeks and closed, happy eyes. Her right ear and tail are black. Her color changes depending on her mood; she is typically green, but can also be pink (happy), yellow (relaxed), red (angry), blue (sad or ill), or orange (bashful or embarrassed).

In her sprites, her eyes seem to be open, albeit tiny and round like Mimitchi's eyes.

Nyatchi is very playful and enjoys playing with balls of yarn. She is quite moody, and her body color changes with her moods. As a hobby, Nyatchi likes knitting. Since she is friends with mice, Nyatchi likes to knit sweaters for them.

Nyatchi only appears on the Version 2 of the Japanese Generation 2, replacing Pochitchi, obtained from great (but not perfect) care, and with a Discipline meter of 75%.

Nyatchi appears as a costume character on the Tamagotchi Connection Version 3. Her Tamagotchi costume can be worn by any adult Tamagotchi by using the "Stuffed Animal" item.

Nyatchi's name comes from the Japanese word for a cat's meow, nyan (にゃん) or nya (にゃ).

Doronekotchi (どろねこっち) is another special characters only on the previously mentioned game. Its name does not seem to connect to Nyatchi's but its head resembles hers. It look like an orange blob of mud with Nyatchi's face and a black ear. In Japanese, doro means "mud" and neko means "cat". It is obtained by winning a game with Ginjirotchi. 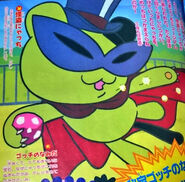