Nyorotchi appeared in the third episode. He keeps stealing Mametchi's food at a restaurant, much to Mametchi's chagrin. He eats so much that he gets sick, and an ambulance arrives. After Nyorotchi receives an injection, he feels better and the Tamagotchis share food together. 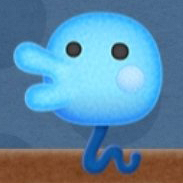 Nyorotchi on the Anniversary m!x