Male:
Okaytchi (オッケーっち Okkētchi) is a male Tamagotchi character who is the director of YUMEX-TV. He debuted in Tamagotchi! Yume Kira Dream. He appears as a non-raisable character on the Tamagotchi P's.

In the anime, he is voiced by Koichi Sakaguchi.

Okaytchi is green with an oblong face, puffy yellow hair, and a pale yellow mouth. He wears a pink shirt, yellow pants, and a white cape.

Okaytchi likes to show off his directing skills and wants to prove that YUMEX-TV is better than TAMAX-TV. He often fights with TamaPtchi. When he is happy or satisfied with a performance, he makes a circle with his arms and says "OK!"

Okaytchi appears in the park. He also appears on a message screen when the player has connected their Tamagotchi P's to another device.

Okaytchi directs all kinds of shows at YUMEX-TV and gets angry when something bad happens in the studio. He becomes Tarai's boyfriend as of episode 37.

Okaytchi appears in episode 5, in which he comes engaged to Tarai at the end. 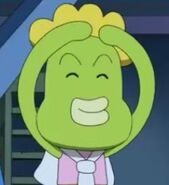 Okaytchi fighting with TamaPtchi
Add a photo to this gallery
Retrieved from "https://tamagotchi.fandom.com/wiki/Okaytchi?oldid=85864"
Community content is available under CC-BY-SA unless otherwise noted.