Male:
Oyajitchi (おやじっち Oyajitchi) is a male character that was introduced as a Special Adult on the Original Tamagotchi and has since become a staple character in the franchise.

Oyajitchi has the appearance of an old man's head, slightly bald with a single strand of hair on his head, and two stick legs. He has two tufts of hair on the sides of his head and a mustache. He is typically depicted with a light peach skin tone, although his vintage USA artwork is more yellow in color. In the Tamagotchi L.i.f.e. app, he can also have yellow or pink skin. The English app data has placeholder graphics for him, showing red and blue variants. The English second generation app's data also has placeholder graphics of him (normal, red, and blue), but with a green outline.

Oyajitchi loves alcohol and is based on the Japanese stereotype of an old, alcoholic man. He has a rugged and fascinating personality that reminds everyone of their father or uncle. His favorite style of humor revolves around bad puns, or "dad jokes", that he spouts constantly.

Oyajitchi is portrayed as a heavy drinker, with an addiction to sake (coffee outside of Japan). As he is a character obtained only from special conditions, he is also characterized as being difficult to find. Oyajitchi is also portrayed as a lover of beautiful women.

Oyajitchi is a secret character on the Japanese version. The user must first raise a Maskutchi from a Tamatchi that started with 0% Discipline. From there, the user must provide good to perfect care, with no care mistakes. Maskutchi will evolve into Oyajitchi around the age of 10. If the Discipline meter is not entirely filled at the time of evolution, it will fill to 100% immediately upon evolving. Oyajitchi wakes at 9 AM, sleeps at 10 PM, and has a base weight of 30. Like Mametchi, he has a longer life span than other adults.

On English versions, he is replaced with Bill.

On the 2017 Japanese replica, any Maskutchi raised from any method may evolve into Oyajitchi by the age of 18 if good care is maintained and the Discipline meter is filled.

Oyajitchi appears as one of the Gotchi Boys that Arukotchi can date. He is normally a rare encounter, but once he's encountered and befriended, he will begin dropping surume (dried squid) along Arukotchi's path deliberately for her to give to him later.

The only exceptions are the Tamagotchi Plus Color and Tamatown Tama-Go; female babies can be born as well, who grow into Grippatchi.

To obtain Oyajitchi, the user must obtain either Ojitchi or Otokitchi and breed one with the other. This will result in the birth of a male baby that will grow into Oyajitchi.

The conditions to obtain Oyajitchi are the same as above. However, a second Tamagotchi device is required to connect to as once the Tamagotchi grows into Ojitchi or Otokitchi, the matchmaker will not show up anymore.

Oyajitchi can evolve from Masktchi, Kuchipatchi, or Nyorotchi after 7 days. Oyajitchi will pass away (or depart to Tamagotchi Planet) after 7 more days.

On this version he is a male adult-stage character obtained by giving 6 or more care misses to Young Oyajitchi. He was voted as the 15th most popular male Tamagotchi in the 15th anniversary poll at the time.

An Oyajitchi may appear when visiting Oyaji Village, and give the player's Tamagotchi a package of yakitori.

Oyajitchi is a potential marriage partner that appears on the 20th Anniversary and Gift versions, accessed through Professor Banzo's Laboratory. In the family photo screen, Ojitchi and Otokitchi appear as his parents.

Oyajitchi appears in a summer animation where they appear in the Tamagotchi's backyard with a food cart. He gives them kakigori to cool down as Sunnytchi is also in the backyard making them feel hot.

Oyajitchi is a park guest that only appears on November 23rd, and is seen wearing a hat for the Anniversary party. Additionally, a photo of him winking and a plush doll of him can be obtained as free gifts from a random visitor on the porch, and both items are disliked by all characters.

In the first Tamagotchi animated production, Tamagotchi Honto no Hanashi, Oyajitchi is shown to be the sole reason for the Tamagotchi's movement to planet Earth, as well as the only Tamagotchi who could speak in complete Japanese at the time. He is shown to be wandering around with a bottle of sake before accidentally stepping on a poop that Zuccitchi left. Everyone laughs at him and leaves, and even the ocean, mountains, and trees recede to get away from him. Sad and lonely, he continues wandering until he bumps into Tamagotchi Planet's mouth. He takes out his frustration for his problems on the planet, and jams his bottle of sake into its mouth. The Planet gets drunk and begins to sing very loudly, annoying its inhabitants and causing them to leave. Oyajitchi is stranded on the drunk planet, leaving him to feebly attempt to sober it.

He makes several cameo appearances in Tamagotchi: The Movie.

In the original Japanese edition of the anime, Let's Go! Tamagotchi, he appears briefly in the beginning of "The Secret of Tamagotchi Town", wandering drunk through Tamagotchi Town. The scene is cut completely from the English dub. He also appears in "Super Heroine Chamametchi!" on the TV screen as Chamametchi flips through the channels.

Oyajitchi made his Tamagotchi! debut in the fourth series, GO-GO Tamagotchi! He has a cart in which he sells cider (instead of sake). His cart is a simple wooden wagon he pulls behind him, but after Tamagottsun, it's transformed into a more modern, self-propelled vehicle that resembles a fish. His business had drastically improved, and he became good friends with Melodytchi. He enjoys singing along to traditional Japanese ballads and offering advice to Tamagotchis in need. He often sings a song called Oyaji no Hanamichi, and the full version of the song was released on the last Tamagotchi! music CD.

In "Passion Blooming! Summer Festival", his stall is present at the DoriTama Town Summer Festival. He partners up with Melodytchi, who is in her Personality Stage evolution Oyamelojitchi. In "Who's the Champion!? Comedy Contest", he and Melodytchi partner up again for a comedy contest. In "Tamagotchi! Space Grand Prix", he is one of the announcers for the Tamagotchi Space Grand Prix, and his Oyaji Cider is sold to the racers and audience.

In "Who is Lovelin's Partner?", he is one of the finalists in Lovelin's contest. He is disqualified after failing to cry on command. He returns in "Fight! ESP Academy" as Lovelin's replacement after Himespetchi reveals her identity.

By the end of the series, he also becomes friends with Gotchiman.

In the short film Eiga Tamagotchi: Himitsu no Otodoke Dai Sakusen!, he was hidden in the egg that Mametchi and his friends needed to deliver to the Gotchi King as part of a special celebration.

Oyajitchi Angel is an angel variation of Oyajitchi that appears on the Tamagotchi Angel. He is described as having trouble fitting into the angel lifestyle as he craves sake and dislikes all the sweets surrounding him in the Tenshitchi Capital.

Kabuto Oyajitchi is a variant of Oyajitchi that appears on the Yasashii Tamagotch. He is impressed with the lifestyle of warriors and is working hard to master Bushidō, the Japanese warrior's code of conduct.

Afro Oyajitchi is a form of Oyajitchi that appears in 64 de Hakken! Tamagotchi Minna de Tamagotchi World as a rare prize character and in the Tamagotchi connection releases when the Hair Gel item is used.

Young Oyajitchi is the young counterpart to Oyajitchi that appears on the Keitai Kaitsuu Tamagotchi Plus. Although he's just a child, he admires Oyajitchi so much that shaved his head to look like him. He's quite the comedian at telling middle-aged man jokes, so Oyajitchi dotes on him.

Explosion Oyajitchi (ばくはつおやじっち Bakuhatsu Oyajitchi) is a special variation of Oyajitchi exclusive to 64 de Hakken! Tamagotchi Minna de Tamagotchi World. He resembles Oyajitchi, except the strand of hair on top of its head is replaced with a bomb wick. Explosion Oyajitchi is randomly obtained from winning the game with any Generation 1 adult.

Thunder Oyajitchi (かみなりおやじっち Kaminari Oyajitchi) is a special variation of Oyajitchi exclusive to 64 de Hakken! Tamagotchi Minna de Tamagotchi World. He resembles Oyajitchi, except he has curly hair on top of his head, with a large point in the middle. Thunder Oyajitchi is randomly obtained from winning the game with any Generation 1 adult.

Santa Oyajitchi (サンタおやじっち) is a special variation of Oyajitchi exclusive to 64 de Hakken! Tamagotchi Minna de Tamagotchi World. He resembles Oyajitchi, except his facial hair is white, he wears a red Santa cap, and carries a large sack behind him. Santa Oyajitchi is randomly obtained from winning the game with any Generation 2 adult.

UraOyajitchi (ウラおやじっち Uraoyajitchi) is a variation of Oyajitchi found on the Ura Jinsei Enjoy Tamagotchi Plus. He is virtually the same as Oyajitchi, both in personality and appearance, except he emits a blue Ura glow. 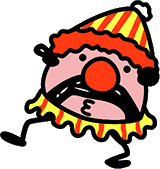 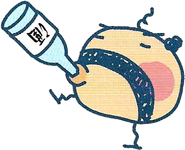 Oyajitchi in a frog suit