The Pac-Man Tamagotchi (パックマン たまごっち) is a licensed Tamagotchi Nano model and a collaboration between Tamagotchi and Bandai Namco's Pac-Man. It was announced on November 1st, 2019, and was released in March 2020, as part of the celebration Pac-Man's 40th anniversary [1].

While the Pac-Man Tamagotchi retains the same size and shape as previous Tamagotchi Nano variants, it has a new mold for the front half of the body. Instead of the teardrop frame and outer shell being two separate molds, the Pac-Man Tamagotchi has them together as one mold, making the frame's outline more shallow. This allows graphics to be printed over the outline, as seen on the black shell. In addition, it has a new style of ball chain not used on previous models.

The Pac-Man Tamagotchi has two growth stages; Baby and Adult. The baby stage is 24 hours long, while the Adult stage will continue until it either dies from neglect or departs. There are seven adult characters; which adult the baby becomes depends on which baby the Tamagotchi began with and the quality of care it is given. Every adult also has an alternate form of them riding on top of Pac-Man; the conditions needed to evolve into this form must be met within 24 hours of the Tamagotchi becoming an adult.

Pressing the A button opens the main menu, with the options to feed or to play the minigames. The meal is a bowl of rice, and the snack is cherries. If the user fails to fill the Hungry or Happy meters for a prolonged period, the Tamagotchi will sulk, facing away from the screen with three lines over its head. Pressing the A button will cheer it up.

At 10 AM, 2 PM, and 6 PM, the Tamagotchi will perform a Close Up on its own. It will not perform the Close Up on if it's being chased by ghosts, surrounded by bugs, or sulking.

The Pac-Man Tamagotchi features two mingames: Pac Game and Catch Game. They each have three tiers of scores: "Great Success", "Success", and "Failure".

Periodically throughout the Tamagotchi's life, it may be attacked by one of the four ghosts. Pressing the A button will summon Pac-Man to chase the ghost away. If left unattended, more ghosts will appear, until there are four. If the user still fails to stop the ghosts after a prolonged period, the screen will become corrupted by bugs. Like the ghosts, pressing A will summon Pac-Man to chase it away. Both the ghosts and the bugs will appear alongside the Tamagotchi while it's asleep. While ghosts or bugs are on the screen, the user will not be able to feed, play games, or check status with the C button, but can still turn the sound on or off and view the clock screen.

In all three instances, pressing A and C together will make a new egg appear. 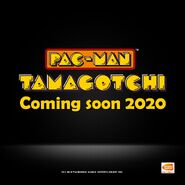 Full introduction of the tamagotchi 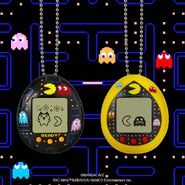 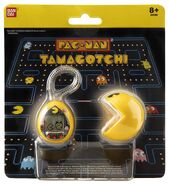 Babytchi sleeping animation with lights on