He has appeared in the Tamagotchi! series and the Sorette Kuchipatchi webisodes.

Papapatchi's name contains "papa" since he is a father. His name ends in "patchi" because he is member of the Kuchipa Family.

Papapatchi's is very similar-looking to Kuchipatchi. He has a pear-shaped body with stubby arms and legs. His skin is a slightly darker shade of green than Kuchipatchi's. He has beady eyes, yellow-green cheeks and a beak. Papapatchi has black hair on the top of his head, which is actually a wig.

Papapatchi is very laid-back, like his son Kuchipatchi. He is jolly and good-natured, but also a bit silly and clueless. Sometimes he can be embarrassing, especially for Kuchipatchi. In Tamagotchi Corner Shop 3, he tells the player's character that he wants to share a secret about Mamapatchi, but he ends up blurting out his own secret instead.

Papapatchi is obtained from the same method as the Version 5/Famitama.

Papapatchi appears in the family photo if Kuchipatchi is raised or married.

Papapatchi appears as a minor character in the Tamagotchi! anime series. He most recently appeared in GO-GO Tamagotchi!. He also had a minor part in Tamagotchi: The Movie. 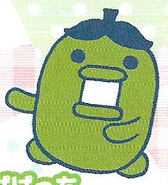 Retrieved from "https://tamagotchi.fandom.com/wiki/PapaPatchi?oldid=102500"
Community content is available under CC-BY-SA unless otherwise noted.