Male:
PapaMametchi (ぱぱまめっち PapaMametchi) is a male parent Tamagotchi character. While official artwork of him has existed since the Chou Jinsei Enjoi Tamagotchi Plus, his official debut on a Tamagotchi toy was with the release of the Tamagotchi Connection Version 5.

Papamametchi has white skin and dark blue ears. He is much taller and very skinnier than Mametchi, and he wears a lab coat with a red tie underneath. In the anime, he is depicted with pale cream skin and navy blue irises.

Papamametchi's artwork on Tamagotchi Channel was updated some time after the debut of the Tamagotchi! series. His mouth became less wide, white circular reflections were added to his eyes, and his skin color changed from white to the pale cream skin tone used in the anime.

PapaMametchi is a protective father who loves his family. He lives together with his wife Mamametchi, and his children Mametchi and Chamametchi. He is a scientist who works in the Mamemame Laboratory. He is constantly coming up with new inventions.

Mamametchi says that even though Papamametchi always looks serious, sometimes he can be very funny.

On the English edition of the V5 Celebrity, he evolves from Mametchi; on the Japanese edition, Mametchi evolves into Tonotchi instead.

Papamametchi is an NPC who can be visited at the Gene Laboratory. He will also appear in the family photo, alongside Mamametchi, if the user's Tamagotchi marries a Mametchi or a variant (such as Mametchi from Makkakka Town or Gift Mametchi).

Papamametchi will appear in the family photo, alongside Mamametchi, if the user's Tamagotchi marries a Mametchi or a variant (such as Prince Mametchi). 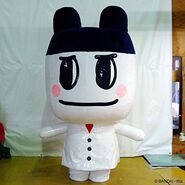 Add a photo to this gallery
Retrieved from "https://tamagotchi.fandom.com/wiki/Papamametchi?oldid=95162"
Community content is available under CC-BY-SA unless otherwise noted.