Female:
Pashalin (パシャリン Pasharin) is Moriritchi's young childhood camera that first appeared in episode 82 of Tamagotchi!. Pashalin's hometown, where she was created, is called Antique Town. Her creator is Firumutchi.

Pashalin resembles a pink camera with a face, yellow arms, and short blue legs. Her face is a pale cream color, and she has round eyes with blue irises and star-shaped reflections. She has three small pink buttons below her face, two of which are shaped like hearts and one of which is circular. She has a yellow bow above her face. At the top of her body, is her heart ball, which is similar to a trackball found in a computer mouse. Moriritchi rolls her heart ball when she needs to charge Pashalin.

When taking photos, she winks at an object or person and often says "OK, cheese!" (はいチーズ hai chīzu). Her photos only come out in black and white, with a slight magenta color.

Pashalin often sits on the front bottom heart on Moriritchi's head, similar to Telelin when she sits in Lovelitchi's heart bag. The heart she is also standing on, was the same replica heart that ending up giving Pashalin life.

Anemoriritchi doesn't like Pashalin, because she has old "embarrassing" photos of her saved dating back 8 - 10 years ago. Anemoriritchi has tried many times to kidnap Pashalin and to erase the photos, but fails every time doing so. Moriritchi is oblivious to this.

Like Telelin, Pashalin used to be an ordinary object. Moriritchi asked Mametchi to fix Pashalin, when she found out she wasn't working properly. But several events occurred while Mametchi tried to fix Pashalin, which resulted in one of Moriritchi's hearts from her scrunchie ending up in the small machine with Pashalin. The heart from the scrunchie suddenly made the small machine unstable and it exploded. When Pashalin came out, she was changed into the Tamamori heart form that brought her to life.

It has five mini-games that can be played to give Gotchi Points, and then the Points can be used to buy items at the shop. A pre-made photo gallery is also featured where it can be viewed to browse 1-bit pixel art of Tamagotchi. Tamatomo Camera Pashalin is also touch-sensitive, in which the pink heart to the left of Pashalin's screen can be stroked to make her happy. She can talk to the user through on-screen text, but she also speaks audibly when being petted or after playing a game.

Pashalin's name comes from the Japanese onomatopoeia Pasha, meaning the clicking or flashing sound a camera makes when taking a photo. The lin, most likely from Lovelin or connecting her to Telelin. Which Telelin's lin comes from Lovelin. 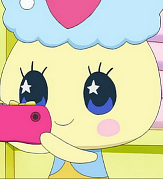 Pashalin after coming to life

Battery Dead
Add a photo to this gallery
Retrieved from "https://tamagotchi.fandom.com/wiki/Pashalin?oldid=96034"
Community content is available under CC-BY-SA unless otherwise noted.