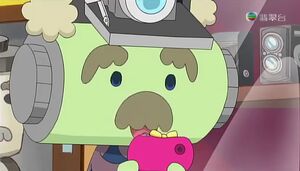 The story continues from part one, Looking for Memories, Run! Lovelin Car.

Mametchi presents a raft that he brought to help Lovelin Car travel on the water. He and his friends blow it up with a pump, leaving them exhausted. Afterwards, they go inside the car and it floats down the river. However, there are sharp rocks pointing out of the river. Kuchipatchi holds the pump nozzle out the window and Mametchi uses the pump to send blasts of air out of it, causing the car to narrowly swerve out of the way.

Lovelin Car then reaches some waterfalls, albeit small. After rushing down them, the gang see that they have just crossed the final landmark from Pashalin's photographic memories; a river with two rainbows arching over it. Pashalin smiles and suddenly starts running away through the bushes, and the others quickly follow her. They find themselves in a small village called Antique Town.

Pashalin runs towards an elderly Tamagotchi snoozing on a chair in front of a camera shop. He wakes up to see Pashalin and the others in front of him. Pashalin gasps and realizes that the Tamagotchi might be Firumutchi, her creator, and she tells him that she thinks he is her "papa". He picks her up to inspect her, and the others show him the photos that they used to locate him. Firumutchi immediately recognizes the photos, confirming that he is Pashalin's creator. Pashalin cries and runs into his arms, and he hugs her. Everyone else tears up as well.

Firumutchi begins to show all the Tamagotchis around Antique Town, with buildings such as an antique music shop and a car wash with old-fashioned vehicles. There is even an electrical store with black and white televisions. Firumutchi takes them into his camera store, which has lots of old cameras.

Firumutchi tells Pashalin about how he constructed her and the first three photos he ever took with her were the landmarks that lead to Antique Town. He is very happy to be reunited with her. Pashalin says she is very happy as well, but that she would rather stay with Moriritchi and her other friends. Firumutchi understands and helps fix up Lovelin Car so that the gang can go home. They bid farewell and as Lovelin Car drives away, Pashalin looks out the window and takes a photo of her creator.

Retrieved from "https://tamagotchi.fandom.com/wiki/Pashalin!_Deep_Emotion!_Homecoming?oldid=59866"
Community content is available under CC-BY-SA unless otherwise noted.