The Personality Stage is not considered a separate growth stage, as during the transition between the adult and personality stages, the Tamagotchi does not age and is more changing forms than evolving, similar to how certain Pokémon that can't evolve can change forms. For example, the forms MameLabtchi and Naughty Mametchi are two alternate forms of Mametchi. On the Tamagotchi 4U, the player's actions affect a Tamagotchi's ability to take on new forms. To achieve the Personality Stage, the player must perform certain actions to their Tamagotchi such as taking good care of them or by overfeeding them.

The Personality Stage can be reversed, but the methods differ depending on the form of the Tamagotchi. It usually involves preventing your character from doing anything associated with whatever caused them to reach the personality stage. For example, Kirakira Spacy is achieved by bathing Spacytchi, and can be reverted to Spacytchi by not bathing him for a couple of days.

Some Personality Stage forms have also appeared in the GO-GO Tamagotchi! anime. Sometimes they are in a character's thoughts, such as Memetchi imagining herself as being very stylish (GuruMemeQueen), and sometimes they really happen to the character, such as Kuchipatchi becoming round from eating too much food (Kuchipatchin).

The Personality Stage forms of Mametchi and Kuchipatchi, from Tamagotchi Channel.

Promotional artwork of MameLove Himespetchi
Add a photo to this gallery

Naughty Mametchi in the anime

King Spacy in the anime 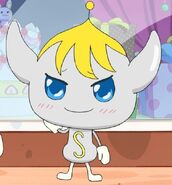 Kirakira Spacytchi in the anime 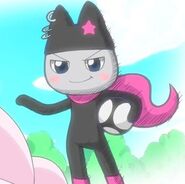 MameLove Himespetchi in the anime

Lovely Fire in the anime 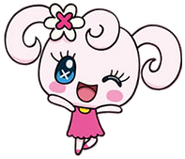 Anime artwork for Slim Neene
Add a photo to this gallery

Retrieved from "https://tamagotchi.fandom.com/wiki/Personality_stage?oldid=100076"
Community content is available under CC-BY-SA unless otherwise noted.