Her birthday is August 30th, and she is voiced by Akiko Kawase.

Pichipitchi resembles a mermaid. Her hair is blue and decorated with white pearls, styled in a ponytail and a right swept up fringe. Her face and arms are beige with pale pink cheeks, and she has dark blue irises and light blue lips. She seems to wear a pink body over her torso and tail, with a yellow collar and a lighter pink lace in the middle.

Pichipitchi is a special mermaid because she can walk and stay on land, but only for a few hours. If she spends too much time on land, she will faint and become weak. When walking on land, Pichipitchi often trips over because of her fish tail. If she goes out too long, her father Pichipapatchi will go looking for her.

In Tamagotchi!, Pichipitchi is depicted as practically scatterbrained. She tries her best to help others, but she always does it in silly ways, sometimes by mistake. For example, when Anemoriritchi needed help to add Tamamori to some food, Pichipitchi wanted to help. Moments later she came back with deep sea mushrooms in an attempt to help Anemoriritchi with her problem. Another problem that Pichipitchi has is that she doesn't know much about life on land. When she is told to get something found on land, she gets something totally different. For example, if she was told to go out and get a cupcake, she will come back with a motor.

On the Virtual Pets

Pichipitchi can be encountered at Mermaid Palace.

Pichi pichi is a Japanese onomatopoeia word for the sound a fish's tail makes as it swims. It can also mean "energetic and youthful", so her name could reference both of these meanings. 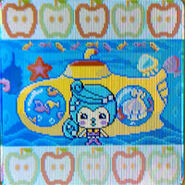 Pichipitchi on the iD L

A scene from Tamagotchi! of Pichipitchi being her weird normal self
Add a photo to this gallery
Retrieved from "https://tamagotchi.fandom.com/wiki/Pichipitchi?oldid=85433"
Community content is available under CC-BY-SA unless otherwise noted.