Pipospetchi (ピポスペっち Piposupetchi), also known as Pipospatchi in the English version of Tamagotchi!, is a male Tamagotchi character. He is one of member and is possibly the true mastermind of Spacy Brothers.

Pipospetchi's appearance is similar to Spacytchi's, who resembles a anglerfish. Pipospetchi has a green tear-shaped body with skinny gray arms, white gloved hands, and white feet. He has blue oval-shaped eyes with four-pointed star reflections. He also has a yellow beak and a small yellow sphere on top of his head.

Pipospetchi is the kind, sweet brother, but has hidden malice in him which is very dangerous (more evil than his brothers). Sometimes it does come out, but mostly when he is talking to his brothers about plans to take over Tamagotchi Planet. This scares his brothers because the plan he thinks up might be too dangerous. When he acts with his evil power, he can lift rather heavy objects like an anchor and throw them considerable distances.

In the anime, Pipospetchi can't say anything but pipopapo (ピポパポ), a Japanese onomatopoeia for the sound of a computer. Because of this, most Tamagotchis can't understand what he is saying. The only ones who can understand him are Spacy Land's alien and Chamametchi.

Sometimes when following his brothers plans, he often sneaks away to do a better job of it himself, which sometimes does make the plan work. He seems to be much smarter than the other brothers even though he is the youngest. For example, in one episode he knew to push open the doors of Waru Cafe when Spacytchi was trying to pull them open.

In episode 23 of Tamagotchi!, it is found out that Pipospetchi has a crush on Chamametchi; he admires her and sometimes blushes when they are talking. He may also like her because she can understand him what he says, unlike most Tamagotchis.

Pipospetchi's name comes from pipopapo, a Japanese onomatopoeia for blipping noises, such as the sounds a computer makes. His name also comes from supesu, the Japanese transliteration of the English word space, which references Spacytchi, and how he and his brothers are from outer space. 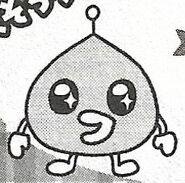 Pipospetchi in a king costume

Pipospetchi in a Dog Costume

Pipospetchi in a Rock Costume

Add a photo to this gallery
Retrieved from "https://tamagotchi.fandom.com/wiki/Pipospetchi?oldid=98969"
Community content is available under CC-BY-SA unless otherwise noted.