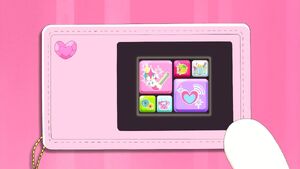 The Pocket Designer (ポケットデザイナー Poketto Dezainā) is an item from the third anime series, Tamagotchi! Miracle Friends. Both Miraitchi and Clulutchi have one as it was created by their father, Doctor Future. He put "special programming" into the device like with his other inventions, which is how the clothes designed on the Pocket Designer can become real.

The twins use their Pocket Designers to design clothes for their friends; their creations then become real so they can be worn. There is also a function called Miraclise. This makes the clothes instantly appear on a Tamagotchi's body, but the Tamagotchi they appear on is unpredictable. According to Doctor Future, Miraclise can only be used once a day, and in emergency situations. The Pocket Designer can also create clothes that give Tamagotchis the ability to fly, which helps them obtain the Dreambakutchis.

The Pocket Designer is pink and rectangular. The screen is farther on the right side of the toy instead of in the middle, and is surrounded by a black border. On the top left corner is a small, pink heart jewel. The slot for the stylus is on the lower right side of the device. There is a pattern of stitches all along the edges of the device.

A charm can be attached through a hole on the lower left corner of the device. Miraitchi's Pocket Designer has a rose charm, Clulutchi's has a crown charm, and Candy Pakupaku's has a candy-shaped charm.

Bandai released a toy of this item in October 2013, called the Pen Touch Pocket Designer Notebook. The standard retail price was 8,379 Yen and it takes two AA batteries. It has a color touch screen and a stylus, similar to a Nintendo DS. However, the touch screen is only for detecting taps and cannot detect strokes. It only has one button, which is the heart in the top left corner, and serves as a "return home" button. Its shell is more detailed than the anime version. "TMGC" and "Pocket Designer" are engraved on its surface, and the front side of the case is pearly. The infra-red sensor is on the upper left side of the toy. The toy is about 11 centimeters wide, 6.5 centimeters high, and 2.5 centimeters thick.

There are also covers available to buy for the toy. There were only two covers released: The original version and a Mezzo Piano version. Pocket Designer sets that include a cover, scrunchie, and book were also released.

The main feature on the toy is designing things that can be sent to the Tamagotchi P's with infra-red communication. Meals, snacks, clothes, accessories, items, and wallpapers can all be designed. The user can also design cards for sending messages to other Pocket Designers. For these message cards, the user can also customize a "Tama avatar" made out of facial features from Mametchi, Memetchi, Miraitchi, Clulutchi, Candy Pakupaku, or Smartotchi, or use their human avatar instead.

When designing meals or snacks, first a base food should be chosen (including but not limited to rice or bread for meals, and pudding or ice cream for snacks). Two toppings can be added, such as cream, various types of fruit, meat, and more. When designing clothes or accessories, first a base style should be chosen (such as dresses, tuxedos, ribbons, helmets, and more). Then the user can choose a base color, a pattern, and a color for the pattern. The method for designing items is the same, and some types of the types items include a car, TV, balloon, and others.

When designing a wallpaper, first a background should be selected. Then the player can choose three items to be displayed in the room, two on the floor and one hanging from the ceiling. The player can move each item in horizontal directions until it is in the position of their liking. Some of the floor items include various musical instruments, table and chair settings, a fountain, vanities, and others. The ceiling decorations include lights, chandeliers, and a disco ball.

Four different features are under the Tama Net option. The first is the auction feature, where a Tamagotchi will be interested in buying an outfit or item. The user can choose which of their designs to put on auction. Auction Ojitchi will display the design with two others, and the Tamagotchi will choose which one they want to bid on. If the Tamagotchi does choose the user's design, they will receive Gotchi Points for it.

There is a Game Center with two mini-games. The first one is Dreambakutchi Dance. A colored music note will approach the outline in the center of the screen. The user should press one of the hearts at the time the music note is inside the silhouette, and in addition, the heart they press needs to match the color of the music note. The second game is where assorted Miracle Friends characters will pop up in the corner in a specific order. The characters will then all appear scattered on the screen at once, and the user has to tap them all in the correct order.

The Dreambakutchis can be visited under Tama Net too. The user can see how many Dreambakutchis they have collected, on a flat grassy landscape (different from the globe landscape shown in the anime). The ability to catch a Dreambakutchi will show up at random while playing with the Pocket Designer. When this happens, the player has to trace a heart to collect it. (But because the touch screen doesn't detect strokes, tapping all the points in order has the same result). The user can customize collected Dreambakutchis with colorful patterns.

There is also a shop. This is where food toppings, patterns, and furniture items can be bought to use in designs.

This is where the user can access different useful features. There is a schedule for marking down reminders of upcoming dates and times, and a memo book for writing short diary entries for the days. There is an alarm clock feature, fortune-telling, and a profile showing the avatar and details of the owner (as well as their designer rank). There is also a Tama Dictionary, which has a section full of fashion-related words showing the words in both Japanese and English (though the definition is only in Japanese). The other section of the Tama Dictionary is full of descriptions for Tamagotchi characters and locations from both Dream Town and Tamagotchi Town. There are a few profiles for characters who did not appear in the anime at the time, such as Oyajitchi.

This is where the user can change the standby screen, turn the volume on or off, set the brightness, or set the time. There are five different standby screens. They are a Miraitchi theme, Clulutchi theme, Candy Pakupaku theme, a Miracle Shop image with Miraitchi, Clulutchi, and Watchlin, and a plain black background with the Miraclise logo and the word "Pocket Designer" in pink.

This is the Miracle Shop from the anime series. The user can check their inventory and designs, and how many Gotchi Points they have. Customers will stop by to talk or ask for something to buy, and the user should recommend them a design that matches the description they ask for (such as a cute dress or a cool accessory). The shop will be dark and there will be no customers when it is late at night. 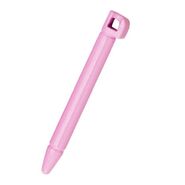 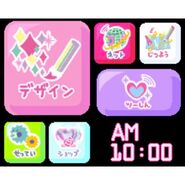 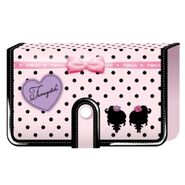 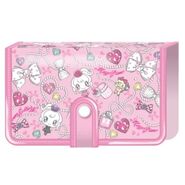 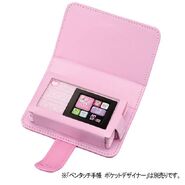 Pocket Designer in its case

Miraitchi using the Pocket Designer in the anime

Dreambakutchi being collected by the Pocket Designer 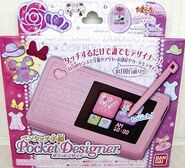 Pocket Designer toy packaging
Add a photo to this gallery

Episode 029
Add a photo to this gallery

Retrieved from "https://tamagotchi.fandom.com/wiki/Pocket_Designer?oldid=102530"
Community content is available under CC-BY-SA unless otherwise noted.