Male:
Polybaketchi (ぽりばけっち Poribaketchi) is a male Tamagotchi character that debuted on the TamaGoLand website. He has since appeared in the anime and in the second generation of m!x games as well.

Polybaketchi's name seems to be a corruption of "polyester bucket."

Polybaketchi has a light blue fluffy body with two tall ears, a pink beak, and oval-shaped eyes which have yellow sclera with dark pupils. In the anime, he also has green irises. He has two small green round hands which are capable of stretching. He sits in a large blue bucket, and wears the bucket lid on his head.

Despite living in a small bucket, Polybaketchi is very comfortable with his home, and has a positive, upbeat personality. In soccer, he excels at being a goalkeeper.

Polybaketchi was available via M!x Station in summer 2017 and spring 2018.

Polybaketchi was a guest in the Tamagotchi On app, during May to June where players could marry him via the Tama Party and receive the fruit tart snack and Mother's Day background from him in the park. His body-type genes, namely his fluffy head and blue bucket and blue-tinted arms, give his descendants his same likes and dislikes.

Polybaketchi appears in episode 12. He serves as the goalie for Motetchi's soccer team. 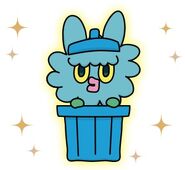 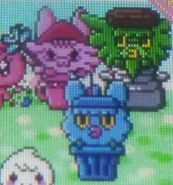 Polybaketchi's parents as seen in the family photo

Polybaketchi giving a present during the Mother's Day Event