Prince Tamahiko resembles a white prince with yellow hair and sparkly blue eyes. He has a small red crown on top of his head, and wears a blue prince outfit with a red cape. He is often seen riding a white horse with an orange mane and tail, light brown hooves, and a pink saddle and bridle.

A handsome prince that travels through space, searching the stars for his perfect bride.

He is a special character who evolves from any teen by connection to 30 or more times with the same friend.

Prince Tamahiko sometimes makes appearances in the Tamagotchi! anime. He has a crush on Princess Tamako and asks her to marry him every time they meet. However, she always says "no". He had a short crush on Himespetchi in episode 129, because he lost his memory. He even went as far as calling her 'My Honey'. However, after he hit his head again and got his memory back, his love for Princess Tamako rather than Himespetchi returned.

In Other Tamagotchi Media

Prince Tamahiko debuted in Tamagotchi Connection: Corner Shop 2. He gets engaged to Princess Tamako after all of the shops are upgraded, but Princess Tamako cancels the engagement because she wants to open shops like Mametchi, Memetchi, and Kuchipatchi.

Tama (たま) is likely from Tamagotchi. Hiko (ひこ) is a Japanese suffix for boys' names. In his Japanese name, ōji (おうじ) means "prince".

Prince Tamahiko on his horse 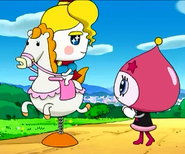 Prince Tamahiko's horse in the anime

Prince Tamahiko as a Tennis
Add a photo to this gallery
Retrieved from "https://tamagotchi.fandom.com/wiki/Prince_Tamahiko?oldid=90148"
Community content is available under CC-BY-SA unless otherwise noted.