Female:
Princess Tamako (たまこ姫 Tamako Hime) is an adult female character that debuted on the Tamagotchi Connection Version 5 Celebrity. She is the daughter of the Gotchi King and the Gotchi Queen, and the older sister of Princess Tamakoko.

Princess Tamako has a round head with blonde hair done up in a bun. She has white skin and pink cheeks. Her eyes are oval-shaped, and each one has two sparkles and four eyelashes. She has a small mouth which is similar to a cat's. She wears a pink dress which billows out. The dress has two layers, and each layer has a row of lace around the bottom, and several little white bows. The dress also has a red collar and a golden brooch. Princess Tamako has a pink crown with dark pink gems on it atop her head.

Princess Tamako is generally kind and friendly. She loves to have fun, but she has an elegant nature as well. However, sometimes she breaks out of her proper composure, such as when she burst into uncontrollable laughter in an episode of Let's Go! Tamagotchi. She has an edge of determination to her. In the Tamagotchi! anime, she once set out with Mametchi and his friends to find a cure when her father got sick. Although Prince Tamahiko has deep feelings for her, she does not want him to be her prince, and she politely but firmly rejects his marriage proposals.

In Tamagotchi Corner Shop 2, she is shown to be very curious, especially about running shops and going to Tamagotchi School.

Princess Tamako is obtainable in the Active group and is obtained from having a bonding of 800-999 or 80-100%.

She also appears on the tie-in website, Tama & Earth EXPO. She can be seen on the Royal Cruise Ship, and plays a cello.

If the player has connected with the same friend at least thirty times during the teen stage of their Tamagotchi, it will evolve into Princess Tamako. She can be obtained from any female teen.

Princess Tamako appeared in episode 10, Gotchi King Doesn't Laugh!?. Mametchi, Memetchi, and Kuchipatchi pay a visit to Gotchi King's Castle, and Princess Tamako is there to greet them. When Kuchipatchi starts making silly mistakes, she tries to suppress her giggles, only to burst into laughter later on. She is voiced by Kawase Akiko (Veronica Taylor in the English dub).

Princess Tamako appears as a recurring character in the Tamagotchi! series. In episode 21, she invites some of the girls from Tamagotchi School to a party at the royal palace. In episode 136, she sets out to find a cure when Gotchi King falls ill. In the first episode of GO-GO Tamagotchi!, she makes a brief appearance with the Gotchi King. She is voiced by Hinako Sasaki, making her sound more mature than before. 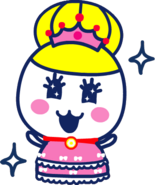 Princess Tamako with her parents, Gotchi King and Gotchi Queen

Princess Tamako being proposed to by Prince Tamahiko

Princess Tamako in one of Tamagotchi!'s opening themes

Individual Tamakohime
Add a photo to this gallery
Retrieved from "https://tamagotchi.fandom.com/wiki/Princess_Tamako?oldid=95637"
Community content is available under CC-BY-SA unless otherwise noted.