Star Wars is a media franchise created by renowned filmmaker George Lucas that begun with the 1977 release of Star Wars: A New Hope, produced by his company Lucasfilm and distributed by 20th Century Studios (then known as 20th Century Fox). The film is an epic space opera that is set, "a long time ago, in a galaxy far, far away" where a fictional galaxy is under the tyrannical rule of the Galactic Empire, and follows a team of freedom fighters known as the Rebel Alliance, who aim to destroy the Empire's newest weapon, the Death Star. A young man named Luke Skywalker becomes caught in the conflict while learning about the ways of a metaphysical power known as "the Force" from Jedi Master Obi-Wan Kenobi.

Star Wars: A New Hope was released to unanimous acclaim, particularly for its groundbreaking visual effects, which were in large part put together by another company founded by Lucas, Industrial Light & Magic. The film would spawn two direct sequels (The Empire Strikes Back in 1980 and Return of the Jedi in 1983), forming what is commonly known as the "original trilogy". 16 years later, a prequel trilogy (The Phantom Menace in 1999, Attack of the Clones in 2002, and Revenge of the Sith in 2005) was released. Overall, Star Wars would become one of the most noteworthy franchises in popular culture, also inspiring multiple television series and an abundance of merchandise, including toys, collectibles, and video games, and is currently the 5th highest-grossing media franchise in the world, standing at $69.4 billion.

In 2012, The Walt Disney Company acquired Lucasfilm, granting them ownership of the Star Wars intellectual property and the rights to produce Star Wars content from then on, including a sequel trilogy (The Force Awakens in 2015, The Last Jedi in 2017, and The Rise of Skywalker in 2019) and two anthology films (with a third currently in development). In 2019, Disney would obtain ownership of the original and prequel trilogies as part of their acquisition of 20th Century Studios, and has notably used Star Wars as a major portion of marketing for their Disney+ streaming service, home to numerous media correlating to Star Wars specifically produced for it.

R2-D2 is an astromech droid who has appeared in every Star Wars film to date barring Solo: A Star Wars Story. He and his colleague, protocol droid C-3PO, serve as significant allies to the protagonists of the films.

While the R2-D2 Tamagotchi's overall design is the same in every region, the battery panel printing is different between the Japanese and international editions. The Japanese edition has the battery panel held on with a pressure tab, while the global edition replaces the tab with a screw. The R2-D2 Tamagotchi uses modified sound effects to represent R2-D2's beeping noises.

Once the clock is set, text reading "A long time ago in a galaxy far, far away...." will move across the screen, followed by the Star Wars logo, which recedes back and disappears. The logo for Industrial Automaton will flash on the screen, and R2-D2 will roll onto the screen from the left side.

There are no on-screen icons, and therefore all information is conveyed through the screen and buttons. R2-D2 is cared for by filling his meters; he has Hungry and Happy meters, each consisting of four units, which are both empty when he arrives. The Hungry meter decreases by one unit per hour, and the Happy meter decreases by one every 50 minutes. If either becomes empty, R2-D2 will call for attention to fill them.

The user can press the C button for an animation to see what he needs. This can only be done if there is no obstacle on the screen and R2-D2 is awake; otherwise, an error sound will play. A dizzy spiral signifies an empty Hungry meter, while a sulking mark signifies an empty Happy meter. Once the meters are not empty, the animation will change. If both the Hungry and Happy meters are not empty, but the Happy meter is not full, R2-D2 will perform a happy animation, which will change based on his current skill. If the Happy meter is full and the Hungry meter is not empty, R2-D2 will perform a Close Up.

Pressing the A button opens the main menu, with the first option for the care menu, and the second option for the training games. In the care menu, the user can either charge R2's battery or wipe him. The charge option fills one Hungry unit, and R2-D2 will refuse to charge anymore once the meter is full. The wipe option fills one Happy unit, and R2-D2 can be wiped even when the Happy meter is full. The A button is also used to open the lights on and off menu when R2-D2 sleeps; R2-D2 in his base form sleeps at 8 PM*, while all of the special skill forms sleep at 10 PM. R2-D2 will wake up at 7 AM, and will turn the lights on himself.

The R2-D2 Tamagotchi has a total of nine different training games. Two games are always available in the menu, while seven additional games are made available based on which skill R2-D2 is presently mastering. The special game of R2-D2's current form is shown as a question mark in the menu. Training games increase R2-D2's Happy level; winning the game fills Happy by one unit, while a perfect game fills Happy by two.

The two base games that are always available are:

The seven additional games are:

Unique to the R2-D2 Tamagotchi are two different varieties of obstacles which may occur. In both scenarios, R2 cannot be cared for or trained until the obstacle is removed, which is done by pressing the A button. If the user fails to remove the obstacle for a long period of time, R2 will malfunction.

In his default form, standard skill modes, and special skill modes, R2 will accumulate dust on his body throughout the day, shown by wavy lines around his body. If the user fails to clear the dust after a long time, more dust will appear.

In the co-pilot modes, an enemy ship may appear trying to attack R2's ship. If the user fails to escape the ship after a long time, the enemy will gradually take up more of the screen.

If calls to care for R2 are ignored for a significant period of time, R2 will malfunction, shown by all of his equipment sticking out of his body at once. The A button must be pressed twice to restore R2 to normal. Like with obstacles, the user cannot care for or train R2 until he is repaired.

Special animations play at specified hours throughout the day, each showing various Star Wars characters and events. These animations will stay on screen for three minutes before disappearing on their own. Pressing any button will end the animation, but in some cases may trigger an additional animation to play.

R2 does not die, and will stay perpetually so long as the user cares for him. However, if the user neglects him and fails to repair him when he breaks down, R2 will shut down. The screen will show R2 being carried away by Jawas, following by an image of a Sandcrawler in the desert. Pressing A and C together will start the Tamagotchi over, replaying the opening sequence and granting the user a new R2-D2. 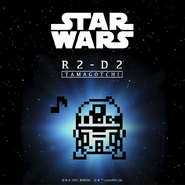 1st: "ALERT! An astromech droid is being delivered and needs a trainer! Are you up to the challenge? 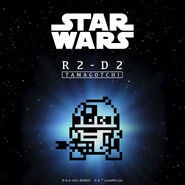 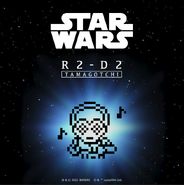 3rd: "It's #NationalBestFriendsDay! Nothing in the galaxy could ever come between R2-D2 and this droid" 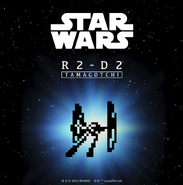 4th: "It's almost I am Your Father's Day! How much does your relationSHIP mean to you? 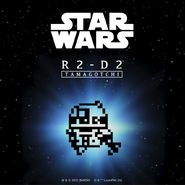 5th: "Training your droid has never been this much of a BLAST!" 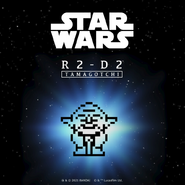 6th: "On the horizon, a new minigame is" 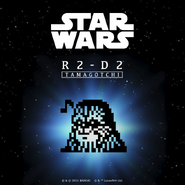 7th: "It's #InternationalChessDay here on earth, but this intergalactic game is about to take over 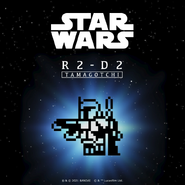 8th: "No one knows how to make their way through the galaxy quite like this bounty hunter" 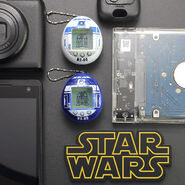 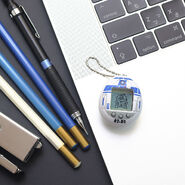 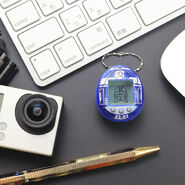 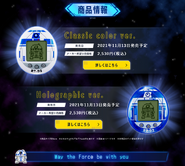 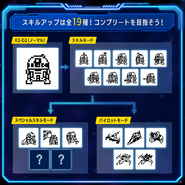 The two base games

The seven additional games that can be unlocked 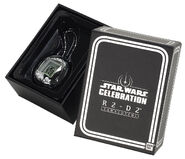 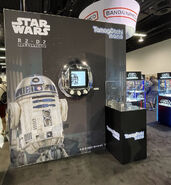 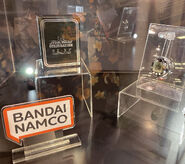 The QR code added after the third day.