Righttchi has a blue body with a yellow stripe going down his front. He has a light yellow face and oval-shaped eyes. In the anime, he has green irises. He wears a red and yellow visor and has spiky hair.

A natural born leader and a childhood prodigy, Righttchi is as charismatic as he is intelligent. He's great at sports, and strives to achieve and maintain a positive outlook. He is also afraid of claws, and faints whenever he sees them.

Righttchi is obtained from Maimaitchi with 0-2 care misses. He has intelligence, style, and charisma characteristics.

Righttchi can be obtained from any male teen with perfect care (0 Care Mistakes with Maimaitchi or Bokuhoshitchi, up to 3 with Cosmotchi) and the user trains him to have an Active personality. However, if no personality training is used, the teen has a 33% chance of becoming Righttchi.

Righttchi is obtained by having any male teen win the Robotics class minigame at Dream School at least three times, and by taking generally bad care of him through achieving a significant amount of care misses.

Righttchi was released as a downloadable character.

Righttchi is Mametchi's classmate in robot class at Dream School. He is Mr. Robomechatchi's favorite student (sometimes even leading the class instead of him), and is said to be one of the smartest students to have ever attended the school. He and Mametchi become friendly rivals. He's also a member of Rainboys, where he plays the guitar. His favorite idol is Benitchi.

He is afraid of crabs because when he was little, a crab grabbed his fingers with its claws and hung on for the whole day.

Righttchi is one of the students in the newly formed DoriTama School, and continues to study in Robotics.

In episode 6, he and the other students are tasked to develop a machine that uses a circle, a square, and a triangle, and has to involve twirling. Righttchi develops a dome-shaped robot that holds a large, square board in one hand that projects the three shapes, and holds a twirling disco ball in the other. While the commissioner is impressed with his invention, Mimitchi is declared the winner in the end.

Righttchi's name comes from the English word right, which his Japanese name raito (ライト) is a transliteration of. The word 'right' particularly refers to his positive attitude. 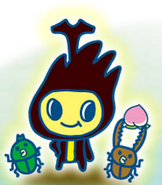 Righttchi zoomed up halfway on the Tamagotchi Friends.

Righttchi with a camera and vest.

Righttchi's house
Add a photo to this gallery
Retrieved from "https://tamagotchi.fandom.com/wiki/Righttchi?oldid=101410"
Community content is available under CC-BY-SA unless otherwise noted.