Not to be confused with Sabosabotchi, a teen character from the Tamagotchi iD L.

Sabusabutchi has a white face and appears to wear a blue costume and a white scarf. He has sparkly eyes and a curly hair on his forehead, as well as two long shapes on the top left side of his head.

Sabusabutchi is full of vitality and somewhat cool.

Sabusabutchi is a student in Chamametchi's class. Like his rival, Atsuatsutchi, he has a crush on Himetchi and they sometimes fight to win her heart.

Sabu is a Japanese word meaning "cold". This could be derived from his cold-themed appearance, and also from the fact that his rival's name, atsu, means "hot". 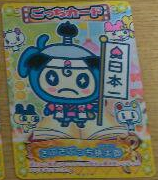 ...followed by Sabusabutchi and Kikitchi doing a "sword fight" with brooms

...and then snickering together

Add a photo to this gallery
Retrieved from "https://tamagotchi.fandom.com/wiki/Sabusabutchi?oldid=90732"
Community content is available under CC-BY-SA unless otherwise noted.