Sanrio is a Japanese company that designs and licenses toys and merchandise. It specializes in focusing the kawaii (cute) culture of the Japan. Sanrio is most known for iconic mascots and franchises, including but not limiting to Hello Kitty, My Melody, Cinnamoroll, Sugar Bunnies, and Jewelpet.

Tamagotchi and Sanrio have had several crossover collaborations:

A Sanrio-themed Tama Deco Pierce was made available for the Tamagotchi P's, granting costumes based on Sanrio characters for several Tamagotchis listed below.

A Sanrio-themed Tamagotchi M!X was released in 2017, which features Hello Kitty, My Melody, Cinnamoroll, Pompompurin, Gudetama, Kiki, and Lala.

There was also a Sanrio Tamagotchi m!x spot that was available from March 2018. It looked like a standard Sanrio m!x, except the main shell was black instead of pink. The m!x spot allowed users to talk to Tuxedo Sam, Hangyodon, Pochacco, KeroKero Keroppi, and Monkichi. There were also two exclusive wallpapers, a snack, and a Pochacco bag accessorry.

The Gudetama Tamagotchi is a Tamagotchi Nano variant themed after Gudetama. It was released in Japan in late 2017 and internationally in late 2018, making it the first collaboration to be available outside Japan.

Like its predecessor, Tamagotchi Meets also has a Sanrio-themed variant that released in Japan in June 2019, which features Kuromi, Badtz-Maru, Keroppi, and Tuxedo Sam in addition to the 7 characters in its M!X counterpart. This variant of Tamagotchi Meets does not currently have a planned international release.

The Hello Kitty Tamagotchi is a Tamagotchi Nano variant that features raising Tamagotchi characters along with help from Hello Kitty. It released in December 2020 in the United States and Australia, and is set to be released in Europe at an unspecified date. 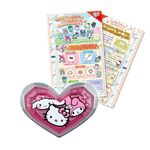 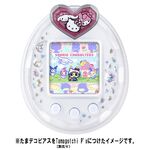 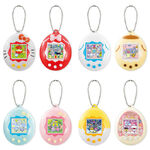 Mini candy cases based on the Sanrio m!x
Add a photo to this gallery

Retrieved from "https://tamagotchi.fandom.com/wiki/Sanrio?oldid=97944"
Community content is available under CC-BY-SA unless otherwise noted.