Female:
Sebiretchi (せびれっち Sebiretchi) is a female adult Tamagotchi character that debuted on the Chou Jinsei Enjoi Tamagotchi Plus in Japan and on the Tamagotchi Connection Version 4 internationally.

Sebiretchi looks like a yellow dinosaur (or dragon) with a Kuchipatchi-like mouth, pink shoes, and pink fins down her back. She can also be described as dragon-like since she breathes fire.

Sebiretchi is a female Kuchi Group adult, evolving from either Young Dorotchi or Nikatchi with high Artistic Skill Points.

Sebiretchi is a female Kuchi Group adult, evolving from either Young Dorotchi or Nikatchi with high Artistic Skill Points. Her favorite meal is kebabs, and she dislikes apple pie.

Sebiretchi appears in even numbered generations with four or more care mistakes.

Sebiretchi appears in odd numbered generations through poor care. She sleeps from 9 PM to 7:45 AM.

Sebiretchi is Gotchi Figure #121. Her favorite quote is, "Tama-saurus time". Sebiretchi appears as a sombrero-wearing Mexican Tamagotchi. She has two games, Trampoline and Farm Keeper, and owns a Mexican Restaurant.

Sebiretchi is a character that can be met at the Park of My Town. 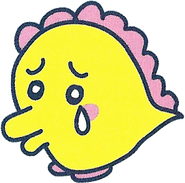 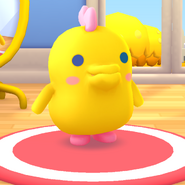 Add a photo to this gallery
Retrieved from "https://tamagotchi.fandom.com/wiki/Sebiretchi?oldid=104940"
Community content is available under CC-BY-SA unless otherwise noted.