Male:
Smartotchi (スマートっち Sumātotchi), also known as Sumatotchi or Smartchi, is an adult male Tamagotchi character who first appeared at the end of second anime series, Tamagotchi! Yume Kira Dream and later debuted as an antagonist in Tamagotchi! Miracle Friends. He is also one of three characters to appear on the Miracrise ver. Tama Deco Pierce for the Tamagotchi P's.

Smartotchi has an interest in music, which is why he is in the music class at Dream School. He is talented at playing the piano and spends a lot of his time playing classical music on the piano in Enchoutchi's house. He is also good at sports, especially basketball, and his classmates greatly admire his skills. He easily adapted to the Dream School of the past whereas Miraitchi and Clulutchi made several clumsy mistakes. He is also quiet and usually hides his thoughts and feelings.

He has a special bond with Pianitchi, partially because of their shared interest in piano music. In "Search! Jungle of Baku~n!?", he reveals that the reason he is so stoic is because he believes he shouldn't make friends since he will soon return to the future anyway. Pianitchi tells him that even though they will part ways one day, their feelings and memories will always remain, and Smartotchi starts allowing himself to become close to others from that point on.

Smartotchi is exclusive to the Miracrise pierce. He is obtained from any male teen by playing with the X Kamen mask three times.

Smartotchi makes a small appearance at the end of the last episode "Let's Confess to Dear M-San!". During the teaser of future Dream Town, his shadow can be seen activating a panel to grant him access to a now opened door.

Smartotchi originally appeared in the Miracle Friends anime as the main antagonist. He is from the future of Dream Town and has a small assistant by his side who is known as X. Smartotchi was the rival of Miraitchi and Clulutchi, as he was seeking to obtain all the Dreambakutchis. It was later revealed he wanted the Dreambakutchis In order to fulfil his wish to fix a piano in Dream Town which later ceases to function in the future, and he becomes friends with the main cast.

When Smartotchi was transported to the past, he ended up on a deserted island in the middle of the ocean. So, he changed into his X-Kamen form and kept flying over the ocean until he saw land in the distance, which was Dream Town. By the time he reached shore he was worn out and injured; he walked on foot until he fainted in front of Enchoutchi's house. Enchoutchi rescued him and became Smartotchi's home-stay parent.

Pianitchi was determined to befriend Smartotchi, and she got upset when he seemed to ignore her when she talked to him. They eventually became good friends after Smartotchi revealed himself as X-Kamen.

After all the Dreamkutchis are together, Smartotchi, X, Miraitchi, Clulutchi, Watchlin, and Candy Pakupaku return to the future and they all part ways. As Smartotchi is getting sent back to the future, he says something to Pianitchi, but it was already too late and he could not be heard. When he arrived to see the spot where the piano was, it had an aquarium built around it and Enchoutchi's daycare center was still there, with the piano functioning and owned by a descendant of Enchoutchi. He played for the first time in the future where everyone gathered around to listen, including Miraitchi, Clulutchi, Watchlin, and Candy Pakupaku. It was the last time he and X were seen.

Smartotchi did not return in GO-GO Tamagotchi!, although he was mentioned and made flashback appearances in several episodes, including one where Pianitchi wanted to keep her promise in making sure that the piano at Enchoutchi's daycare center is protected.

Smartotchi has a special costume that he wears to keep his identity secret. This costume consists of a suit that is the same as his normal one except it is black and purple instead of blue and gray, and a black mask on his face. Also, X transforms himself into a small winged device and attaches himself to the back of the costume, giving it wings and allowing Smartotchi to fly.  When wearing this disguise, Smartotchi is often referred to as "X-Kamen", kamen meaning "mask".

Smartotchi wears his X-Kamen disguise when hunting for Dreambakutchis. It makes it easier for him to capture them using his ability to fly. Smartotchi rarely talks as X-Kamen when Miraitchi and Clulutchi are around, most likely so that they do not recognize his voice. When Smartotchi went to Dream School for the first time and saw the twins, he was uneasy but they didn't recognize him and greeted him cheerfully.

Since Smartotchi revealed his intentions to the twins and their friends, he no longer hides his identity with his X-Kamen disguise.

X is Smartotchi's companion who is loyal to him. He accompanied Smartotchi when he traveled to the past and helps him on his goal of catching all the Dreambakutchis.

Smartotchi and X when they first arrived in the past

Smartotchi smiling to his friends

Smartotchi ignoring Candy when she tries to give him candy 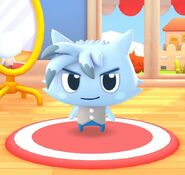 In My Tamagotchi Forever
Community content is available under CC-BY-SA unless otherwise noted.
Advertisement