Spacytchi's name comes from the word "space", since Spacytchi is an alien. It could also come from the term "spacey", an adjective for a person out of touch with reality.

Spaceytchi resembles a anglerfish, also known as a black seadevil. The two horns on the side of his liquid drop/onion-like head resemble the fins, and his antenna which also glows when he wants it to, resembles the fish's esca or illicium (the little ball of light hanging on the top of the head). He has two white legs, grey arms and two white gloves as hands. He also has the letter S on his chest, meaning the first letter of his name, Spacytchi.

Spacytchi is desperate to conquer Tamagotchi Planet. He is very persistent, not giving up easily on anything he puts his mind to. Since he does not know much, however, his plans usually fail. He can be stubborn and a bit selfish. Spacytchi also had a crush on Himespetchi for a while, having made a promise to become the king of Tamagotchi Planet and making Himespetchi his queen back when both were younger, though Himespetchi's crush on Mametchi ruined this; Spacytchi also had a past crush on Agetchi. Although he has short patience with his brothers, Pipospetchi and Akaspetchi, and sometimes fights with them, he does care for them a lot.

He claims that aliens don't exist (most likely due to Spacy Land residents are also referred as Tamagotchis), unbeknownst to him that he actually is one. When he is around anyone besides his brothers, he gets shy, muttering a lot and acting nervously. He also has a kind part to his personality, such as when he found Imotchi's ribbon when she'd lost it. Spacytchi is good friends with Kuromametchi and they get along well, and throughout the series he has become friends with the other characters as well, sometimes making him reluctant to carry out his plans of conquering the planet.

Spacytchi appears in the slot game in round two and three where being landed on has a negative result.

Spacytchi is a special adult that can be obtained on both versions. Starting at the baby stage (Pachikutchi on the version 1, or Nittobotchi on the version 2), the user must never feed the baby meals or play the game; instead, they must only feed snacks, and feed over 100 snacks. The user must still clean poo and cure sickness as normal, and turn off the lights when he sleeps.

Spacytchi evolves from Maimaitchi or Cosmotchi with 8 or more care mistakes and the Charisma personality.

Spacytchi is a Gourmet-group adult can be obtained from any of the three male teens with severe neglect.

Spacytchi can be obtained either by feeding a male child Curry Rice five times, or by obtaining 8 or more Care Mistakes.

Spacytchi appears on the Dream version of the Tamagotchi m!x, evolving from any male teen with 7 or more care mistakes. Spacytchi does not appear in any town, therefore making his genetics available only during the first generation.

Spacytchi can appear as one of the riders in the Coffee Cup game.

Spacytchi appears in all four series of the Tamagotchi anime, acting as an antagonist with his plan to take over Tamagotchi Planet with his brothers, Pipospetchi and Akaspetchi. Despite being an antagonist, he rarely acts antagonistic against others or harms them. He instead blends in with the people of Tamagotchi Planet and tries to carry out his evil plans in secret. However, his plans never work due to his misunderstanding of Tamagotchi culture, general incompetence, and being inadvertently stopped by others.

Spacytchi is introduced in "Get Ready! The Big Race on Tama Street" where he enters the race on Tama Street, intending to win and use the attention to announce their takeover of Tamagotchi Planet. Although he wins, no one is at the finish line, having gone over to watch Mametchi and Kuromametchi rescue Kuchipatchi. In the next episode, "Tamagotchi School's Transfer Student", he and his brothers enroll in Tamagotchi School.

In "Beep Beep! Ready to Take Over Tamagotchi Planet!", Spacytchi and his brothers discover that everyone in Tamagotchi Town is gone. At first they are happy to be able to take over the planet with no resistance, but they soon become scared that a bigger force wiped everyone out and is coming for them next. Eventually, Necktietchi shows up to tell them that everyone is celebrating "Roll Over the Floor" day and they cry tears of happiness, happy that they're not alone. Spacytchi is invited to Lovelitchi's Christmas costume party in "Get Ready! A Christmas Costume Party!" and he struggles to figure out what costume to wear as he doesn't know what Christmas is. After asking everyone what Christmas means, he combines all the answers into one costumes and wins the contest. He is later seen enjoying the company of everyone at the party.

They try to move into a new secret base in "The Spacy Brothers' Moving", but only manage to stay for a night until it's destroyed by the TAMAX-TV crew in a shooting of Gotchiman. They then try to build their own secret base near Tamagotchi School in "Go! Typhoontchi VS Secret Base", but it's blown away by Typhoontchi when he visits Tamagotchi Town. The brothers finally get a permanent home in "3, 2, 1, Start! Mini TAMAX-TV", when the small version of TAMAX-TV that Mametchi's class built accidentally gets blasted into the sky from Uwasatchi pressing a button. The tower crash lands into a beach where the Spacy Brothers find it and declare it their new secret base.

In "Scoop! Spacytchi's Secret Dawasa", Uwasatchi overhears Spacytchi boasting about taking over Tamagotchi Planet and tries to tell her friends. However, no one believes her because she is always making up false rumors. Uwasatchi then enlists Nachuratchi's help to take photos of the Spacy Brothers acting evil and they follow them back to their secret base where they get some pictures. However, after they develop the photos it turns out Nachuratchi took pictures of the sky instead, keeping Spacytchi's evil plans safe.

Spacytchi gains a crush on Agetchi in "Age~? Spacytchi's Love" and becomes smitten with her, wanting to take her out on a date so he can confess his love. His crush is strong enough to make him abandon taking over Tamagotchi Planet to his brothers' disappointment. However, it's revealed at the end of the episode that Agetchi already has Necktietchi as a boyfriend, breaking Spacytchi's heart. After a few moments in shock, Spacytchi gets back to focusing on taking over the planet with his brothers.

Spami is a costume transformation exclusive to Sanrio Change pierce on the Tamagotchi P's. Spacytchi is dressed in Kuromi's hood and is accompanied by small versions of Akaspetchi and Pipospetchi who sit on his ears.

Pixy Spe Elf is a costume transformation exclusive to the Fairy Change pierce on the P's. Spacytchi is dressed as a small pixie with wings. He lacks his hood and wears a green outfit while holding a yellow magical staff.

Old Man Spacy is a costume transformation exclusive to the Baby Change pierce on the P's. Spacytchi is aged up to an old man and has lighter gray color. He has a white moustache and supports himself on a walking cane. He is the only Tamagotchi on the Baby Change pierce to be aged up as every other character is aged down to infant age.

Charisma Spacy is a costume transformation exclusive to Anniversary Change pierce on the P's. Spacytchi is dressed up in a multicolored suit and is on a small stage with a microphone. He is surrounded by smaller Tamagotchis floating around him. Charisma Spacy was a costume designed by a fan that won the poll to get added into the Anniversary Change pierce.

Shining Spacytchi is one of Spacytchi's personality stages on the Tamagotchi 4U and 4U+. Spacytchi's whole body is shiny and he has yellow hair on his head replacing the hood he normally has on. With his new conventionally popular form, it becomes hard for him to focus on taking over the world. He is obtained by taking 5 baths in a row and the form can be reverted by not bathing for 2 days.

King Spacytchi is one of Spacytchi's personality stages on the Tamagotchi 4U and 4U+. Spacytchi is dressed up in a royal outfit and wears a crown on his head. He has mastered all his skills and he is ready to take over the world. However, ruling the world is difficult and the stress seems to bring out his cruel vices. He is obtained by learning all special skills and raising happiness up to 80%. The form can be reverted by letting happiness drop below 60%.

Akaspetchi is Spacytchi's brother. He is smart and mature, and often ends up getting yelled at by Spacytchi for confusing him or pointing out holes in his plan. Despite this, Spacytchi still respects Akaspetchi and takes his input into account when forming evil plans.

Pipospetchi is Spacytchi's other brother. He is kind, but has hidden malice which comes out whenever he suggests an idea to his brothers. They are often terrified of his suggestions and tell Pipospetchi that he's going too far. Sometimes, he sneaks ahead to do Spacytchi's plan in a more efficient way and it works most of the time. 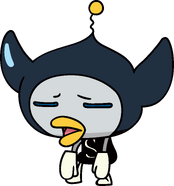 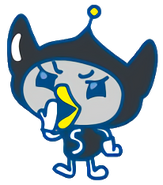 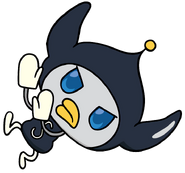 Spacytchi in an invisible box 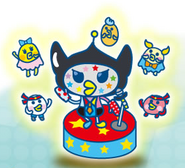