Sukatchi (すかっち) is a male adult Tamagotchi character that only appeared on the Tamagotchi Connection Version 5. His female counterpart is Violetchi.

Sukatchi has light pinkish skin. He wears a striped red, white and blue beanie (resembling the French flag) and a red scarf around his neck. A single pinkish-purple curl of hair sticks out from under his beanie.

He is described as a feminist (which can also just mean a chivalrous gentleman in Japanese), and he wants to add more of a French touch to the way he dresses, but he doesn't have the knack for it.

Upon marriage, Sukatchi evolves into Memepapatchi. If Sukatchi is sent to a Violetchi whose Bonding is at 100%, he will instead evolve into Papakizatchi while she evolves into Mamavioletchi, forming the Violet Family.

Sukatchi appears as a background character in Tamagotchi: Happiest Story in the Universe!.

Suka (スカ) is also the Japanese transliteration of 'ska', which is the genre of music that Sukatchi likes. 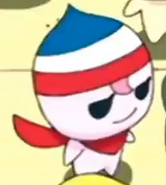 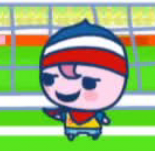 Sukatchi blushing and waving
Add a photo to this gallery
Retrieved from "https://tamagotchi.fandom.com/wiki/Sukatchi?oldid=98152"
Community content is available under CC-BY-SA unless otherwise noted.