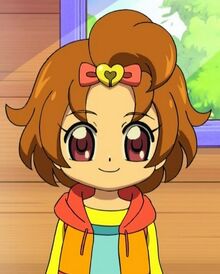 Suzune (すずね) is a human character from The Earth who debuted in episode 36 of GO-GO Tamagotchi!. She is the younger sister of Yukine. She is younger and shorter than Yukine and Tomomi.

She is voiced by Rena Ueda.

Due to her young age, Suzune acts very child-like. She is energetic and impatient, and gets excited easily. Sometimes Yukine has to tell her what to do. Both she and her sister are big fans of Tamagotchi.

Suzune has brown eyes and short reddish-brown hair. She has a red bow with a heart-shaped bell on her fringe. She wears blue shirts, a blue and yellow sweater, and an orange and red vest. She also wears brown leggings and red sneakers with white ribbons on them.

Suzune appeared in Go-Go Tamagotchi along with her sister Yukine, in episode 36. They were first seen making christmas goods where they heard their door bell ring, where Mametchi and his friends were standing. They were excited to see them as they created from devices. In episode 37, they invited the Mametchi and his friends in the house and helped the Tamagotchi save Christmas. Afterwards, they waved goodbye to their Tamagotchi friends and then ask Santa Claus to give them a letter for their time together just before he left as well. She was last seen looking at the christmas card with her sister.

Suzu is Japanese for "bell".

Retrieved from "https://tamagotchi.fandom.com/wiki/Suzune?oldid=84644"
Community content is available under CC-BY-SA unless otherwise noted.