TamaOtch (玉緒っち Tamaotchi) is a limited edition Tamagotchi named after the Japanese actress Tamao Nakamura. It was released in Japan in April 1998.

The TamaOtchi was released in one pink shell, with violet borders and logo, and red buttons. There are patterns of cherry blossoms on each side of the screen. TamaOtchi is below the logo, painted violet. Due to the production material used for the shell, some with frequent sun exposure would eventually become discolored into a bright orange color, though the painted portions maintained their original coloration.

The objective of TamaOtch is raising it to grow up to become a successful movie star. The player will help train their Tamagotchi for performances. Also, its sound and touch sensitivity is stronger than most of the Tamagotchis in the vintage era, meaning that the player can interact with their Tamagotchi by making a loud noise, tapping on the case of the unit, or jingling the chain against the left side.

When starting a TamaOtch, there are three eggs available to choose from. It's not clear what they affect, although theoretically it's related to what characters you will get.

The check meter has 5 screens: Age and weight, discipline, hunger, happiness and practice.

The TamaOtch features a slot game. The A and B buttons are used to stop the reels; Tamaotchi will stop the third reel themselves. With good timing, you can match the icons almost every time; a quick rolling motion across the A and B button works with practice.

The key feature of TamaOtch, the training games are the main factor in getting a good character. There are three different training games; Ad-lib ( Adoribu), Dancing ( Odori), and Acting ( Shibai). There are three rounds each of which contains three moves. There are two moves which can be chosen from, one of them will be performed through pressing A and the other through pressing B. For Ad-lib, the character can either act confused (button A) or surprised (button B), for Dancing, it can either move left (button A) or right (button B), and for Acting, it can either act sad (button A) or happy (button B). The round starts by having the user press a button three times to form a sequence, and then Tamaotchi will copy the sequence. She will always get the first two right, but can get the third one right or wrong. When she gets it right, the user should tap the case, and when she gets it wrong, the user should press A. This is then repeated for two more sets, and if Tamaotchi gets at least 2 of the three sets right, she will gain Practice points and lose one gram of weight, however if she gets all three sets wrong she will lose a happiness heart. Four successful training sessions will fill the Practice bar.

The toilet icon is in the shape of a squat toilet. It functions the same way as any other Tamagotchi. One flush will remove one poop on the screen. It is possible to clean poop while Tamaotchi is sleeping.

If Tamaotchi is being ill behaved, the caretaker uses this icon to discipline her. Sometimes she might call for discipline when she wakes up.

The medication icon is used to cure Tamaotchi when she is unwell, or has a tooth ache.

Every day Tamaotchi will perform on stage for 30 minutes. When she starts performing depends on the character, although it is generally in the evening.

There is no icon for attention; instead she will flash a message in hiragana (おはようございます) across the screen. This will happen when she wakes up in the morning, hatches from an egg or has empty meters, including the training meter. If neglected enough at later stages, she will eventually retire and drive away.

Occasionally, an unusual event may occur. They are uncommon and are generally randomly triggered.

TamaOtch has a somewhat unusual growth pattern. When it first hatches, it will grow into Ashitchi, and remain in this stage for 24 hours. If good care is taken, it will become Asadoratchi instead of Motchimotchi. "Good care" for TamaOtch isn't entirely clear, but seems to consist of winning each Training Game type a minimum number of times every day, and picking a certain one to win a few more times as a 'specialty' that it performs during Stage Time.

The second stage lasts 36 hours maximum; however, after 24 hours, if it has not been cared for well enough (proper training regimen), it will immediately turn into Kakuretchi. Otherwise, the phase continues to 36 hours, at which point it's still possible to obtain Kakuretchi without proper training. The best result is Tamaotchi. Notably, Kakuretchi will not be able to turn into any adult except Tamaotchi or Tabakotchi.

The third stage lasts 120 hours (5 days) maximum. Every 24 hours, it's possible to get Tabakotchi if training is not being done correctly. However, if training is excellent enough, it can also turn into Baradorutchi after 24 hours. Kakuretchi will become Tamaotchi instead in this case. If the best/worst care marks are not hit, after 120 hours it will turn into one of these adults, listed from best to worst.

Taking excellent care and training of Baradorutchi or Kakuretchi in the final stage will result in secret characters Tamaotchi2 or Sendatchi. 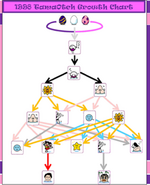 A discolored "orange" TamaOtch
Add a photo to this gallery
Retrieved from "https://tamagotchi.fandom.com/wiki/TamaOtch?oldid=99833"
Community content is available under CC-BY-SA unless otherwise noted.