TamaPtchi has a potato-shaped body. His skin is orange, and he has a light orange beak. He wears a white suit, a white cap, and a pink cape with the letter P on it. He almost always wears sunglasses, but when he takes them off, his eyes look like very tiny dots.

TamaPtchi is the chief director of TAMAX-TV. He is very good at his job, having directed Gotchiman, Playing with Lovelin, Thief Papillon, and many other shows starring or prominently featuring Lovelin.

He cares about TAMAX-TV's staff and actors/actresses, and is most commonly seen alongside his assistant, ADtchi.

TamaPtchi works at the combined TAMAX-TV and YUMEX-TV after the Tamagottsun. He dislikes Okaytchi, who was previously a director at YUMEX-TV. They argue frequently, but they often have to work together and codirect the shows.

"P" is a Japanese suffix formed from the word producer (even though he's a director). 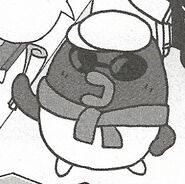 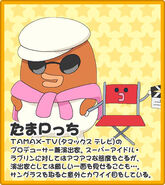 TamaPtchi in one of Tamagotchi!'s opening themes
Add a photo to this gallery
Retrieved from "https://tamagotchi.fandom.com/wiki/TamaPtchi?oldid=97545"
Community content is available under CC-BY-SA unless otherwise noted.