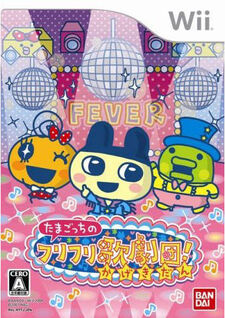 Tamagotchi: Dance Fever! (たまごっちのフリフリ歌劇団 Tamagotchi no Furifuri Kagekidan) is a music Tamagotchi video game developed by h.a.n.d. Inc and published by Bandai Namco Games. The game was released in December 6, 2007 exclusively in Japan.

The player takes the role of Mametchi, Memetchi, and Kuchipatchi as dancers and singers in a rhythm-based video game. Players perform with the Wiimote only. Controls consists of shaking the Wiimote to the beat and pressing the indicated buttons on the screen. There is no "life meter" involved, the game evaluates the player's overall performance in a five-star system. There are eight stages to perform, each with their specific songs and theme. Players can adjust the difficulty level of the songs by up to four levels to make the rhythm more challenging.

Aside from rhythm-based gameplay, there are a few side-activities such as taking pictures of Mametchi, Memetchi, and Kuchipatchi on various stages. The player can also import their Miis into the game and appear in the audience.

Retrieved from "https://tamagotchi.fandom.com/wiki/Tamagotchi:_Dance_Fever!?oldid=84620"
Community content is available under CC-BY-SA unless otherwise noted.