The Tamagotchi 4U (たまごっちフォーユー Tamagotchi Fōyū), is a release of the Tamagotchi color series, released exclusively in Japan on September 27, 2014. Like the previous color releases, it was based on the then airing Tamagotchi! anime series GO-GO Tamagotchi!, featuring two new characters and taking place in DoriTama Town.

The 4U features NFC, which was introduced with the Tamagotchi Friends, and features a new connection method known as "touching," which replaces infrared communication from previous versions. The back of the 4U could be positioned against "touch spots" located across Japan to access special downloads, such as new room designs, characters, and more. An app was released for NFC capable phones which provided additional downloads. The 4U is also notable for having many accessories to customize the device itself, such as faceplates, charm straps, and soft cases.

A user by the name of Mr. Blinky has created a patch that translates the menu options to English. They have also translated the app into English and made it available past its official shutdown.

Tamagotchis can now learn certain skills if the user trains them or sends them to school. There are two types of skills:

The Tamagotchi 4U continues the tamatomo system, this time renaming it as clover pieces. Each character (including downloadable ones) has four clover pieces to collect and collection of all four will record the character's clover in the notebook option. Three of the clover pieces are earned by eating a certain food, playing with an item, or putting an accessory on. The last piece is earned by raising an adult character for 48 hours. Obtaining all 10 base character's clovers will let the Tamagotchi receive a food or item from a character in the park.

There are three base games with additional ones being available from the app or touch spots.

The Tamagotchi 4U features NFC (Near Field Communication) which allows it to communicate with other 4Us, Touch Spots, and smartphones by touching the back of the device to them. There are several features tied to NFC:

Connection with Other 4Us

Connection with 4U app and Touch Spots

The 4U can communicate with the 4U app by touching compatible smartphones or tablets with NFC capability. The 4U could also communicate with specifically marked NFC spots called "Touch Spots" which could be found throughout Japan in stores, restaurants, parks, and arcades. Touch Spots could be seen on posters, displays, arcade machines, and Bandai Data Spots. Both the app and touch spots offered:

Communication with any NFC device

By touching any device with NFC capabilities (Ex: Smartphones, key fobs, amiibos), some unique features could be used:

Like previous releases, adult Tamagotchis will run away if neglected for too long (younger stages will die instead). The departure sequence begins when the Tamagotchi is seen with a suitcase. This can be stopped by selecting the "talk to" option from the clover icon 3 times to convince them to stay. Othewise, if enough time has passed or the "scold" option is used, the Tamagotchi will run away and leave a goodbye letter.

The user will still have a chance to recover their Tamagotchi by selecting "Yes" after reading the letter and seeing the prompt asking if they will search for them. An animation will play of the neighborhood being searched before the Tamagotchi is found staying in a tent at the park and returning home. If "No" is selected or 24 hours has passed, another goodbye letter will appear on screen and the Tamagotchi cannot be brought back. Pressing A + C will make a new egg appear.

On the Go Connection

This icon is not selectable and instead acts as an attention signal when the Tamagotchi needs the user's attention.

The Tamagotchi 4U app was a companion app that allowed connections with the Tamagotchi 4U via NFC. It enabled users to access exclusive downloads, such as characters, clothes, items, and foods. The downloads would be updated every now and then and some content needed to be paid for to access it. The app was only available for download on Google Play and ran primarily on Android phones. It also required the user to create or register a Bandai Namco account and link their 4U with it.

On September 2016, the 4U app was shut down and taken off Google Play.

The Tamagotchi 4U is notable for having a bigger focus on customizing the device, with many kinds of accessories being released for it.

There have been special sets which came with a faceplate and Touch Card exclusive to that set. The touch cards had downloadable characters, items, and rooms that could be accessed by touching the 4U to the NFC touch spot marked on the card. 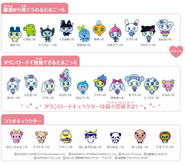 Base, downloadable, and promotional characters 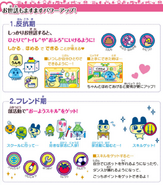 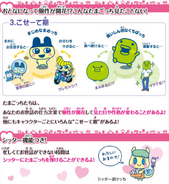 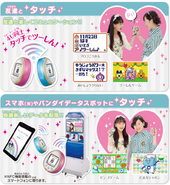 Fortune-telling and games available through bumping 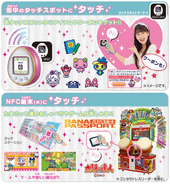 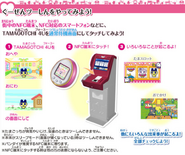 Various devices and spots the 4U can touch with 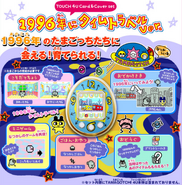 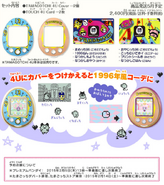 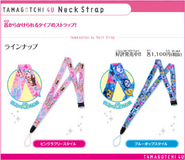 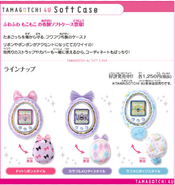