The Tamagotchi 4U+ is the same as the 4U in design, with the difference being in the coloration of the device. The faceplate's color and the trim around it now matches the base color of the device.

The Tamagotchi 4U+ has the same gameplay from the 4U with some new added features.

There are new baby and child characters with the addition of two adults: Candy Pakupaku and Lovesoratchi who were previously exclusive to Touch Cards and Touch Spots. There are also four new personality stages: Himespetchi and Melodytchi now have an additional Personality Stage form, whereas the latter two are obtained through Candy Pakupaku and Lovesoratchi, who have one each.

Certain items and foods are marked with a symbol (A !? inside a chat bubble). When two Tamagotchis connect and exchange these items, it will change up to 3 times (i.e. apple becomes sweet apple, which becomes cooked apple and finally apple pie). These special items were available via Touch Spots and the 4U app. If the item was sent to a 4U, it would not change and instead would be used as a normal item.

There are two new locations to visit. Unlocking them requires reaching a certain number of NFC touches.

There are two different games to play at the Game Corner:

Two special Tamagotchi 4U+ shells were released to celebrate the Tamagotchi franchise's 19th anniversary. Like the anniversary version of the 4U, the content on the device was the same as the base 4U+.

A promotional image which includes the release date, starting price, and the two new characters 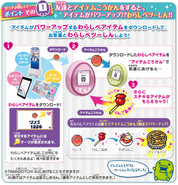 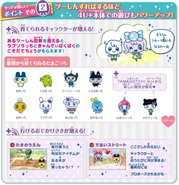 Base characters and new locations

Several images of adult Tamagotchi characters on the 4U+