Life Simulator
Tamagotchi Collection (たまごっちコレクション Tamagotchi Korekushon) is a Japanese-only DS game released in 2011. It is a life sim game unlike most of the other Tamagotchi games, which all had the Corner-shop style. It features all the main characters from the Tamagotchi! anime.

After crashing a rocket on Tamagotchi Planet, the player finds they have transformed into a Tamagotchi. They soon meet another Tamagotchi (Mametchi, Lovelitchi, or Melodytchi, depending on who the player chose) who shows them to a house to live in.

At the beginning of the game, the player can choose one of two rooms, which have slightly varying colorations. The player can create their own character by using features (e.g. body shape, eyes) from other characters they have unlocked.

The player can visit other Tamagotchi characters. Sometimes, a new character will be unlocked if an already-existing character introduces them to the player. Players can visit and play games with other characters. Becoming best friends with a Tamagotchi will lead to them giving the player their picture.

Characters can visit the player and other characters. When a character is not at home, their Tama Pet / companion may be in their place. (For example, Akaspetchi and Pipospetchi are present when Spacytchi isn't home, and Hapihapitchi is present when Chamametchi isn't at home). When there are three characters in the same house, including the player, a new multiplayer game will be available to play.

Each player tries to pin the other's arm down.

This game is somewhat similar to Go. Players use different colored tiles. They each take turns placing tiles on a board. Each player can only place one tile on the board per turn. The objective for each player is to surround their opponent's tiles. If one player's tiles become 'trapped' between their opponent's tiles, those tiles will belong to the opposing player. The player with the most tiles at the end of the game wins.

Each player tries to catch as many falling stars with their UFO as they can within a one-minute time limit. Sometimes space rocks will fall as well, and if the player touches one of those by mistake, they will get zapped. Each star is worth ten points, and the player with the most points wins.

Sugoroku is a Japanese board game. Players take turns rolling a die to determine how many spaces they will move. Some of the board spaces have an effect on the player, such as granting them to move on a few extra spaces, or being unable to move for one turn. The first player to make it to the end wins.

At the beginning of the game, there are 15 marbles. Players take turns drawing marbles. The player can choose to draw 1, 2, or 3 marbles per turn. The player who takes the last marble loses.

The players are each dealt a hand of cards. Each round, a player must choose a card from another player's hand. Players discard pairs from their hand, such as a king and a king or a seven and a seven. The first player to discard all the cards from their hand wins. There is one card in the deck called the 'old maid', which is represented by a Joker card. This card is considered a burden, because it is the only one of its kind in the game, and thus can't be paired up to be discarded. If a player gets stuck with the old maid, they can only hope someone else takes it from them.

Players use a toy that has a miniature Gotchi King on top of a small fountain. There are nine buttons, and one button will turn on a fountain and launch the Gotchi King toy into the air. Players take turns pressing buttons. The players have to guess which button they think it is, and they can press only one button on their turn. The player who presses the correct button wins. 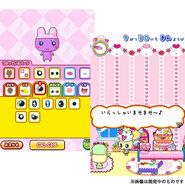 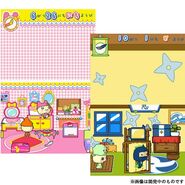 Tamagotchis interacting with items in their houses

The Tamatta feature, which allows you to send and receive messages
Add a photo to this gallery

たまごっちコレクション CM
Add a photo to this gallery

Retrieved from "https://tamagotchi.fandom.com/wiki/Tamagotchi_Collection?oldid=101275"
Community content is available under CC-BY-SA unless otherwise noted.