The shell has a small antenna sticking out of the left side, much like the Keitai and the Tamagotchi Plus Akai. This is also the first American Tamagotchi to feature a new sprite for Mametchi that has been available in all versions following the V3 up until Tamagotchi Friends. It was the last American release to have Mimitchi as the series mascot, who was replaced in that position by Mametchi in this version's second wave.

The icons are the same as the previous Tamagotchi Connection releases:

Hunger and happiness are displayed in four hearts. The more hearts filled, the more full or happy the Tamagotchi is.

Discipline is displayed in a bar with 9 lines. The more lines filled, the better disciplined the Tamagotchi is. The Tamagotchi may continue to beep for more discipline even if the Discipline bar is full.

The gender is displayed as either "Boy" or "Girl". Every time the Tamagotchi has a baby, the baby will become the next generation of the Tamagotchi's family.

The user can earn Gotchi Points by playing games. Up to 9999P (Points) can be stored on the V3.

The screen displays the username the user created during the initial setup of the device. The username was used for accessing Tamagotchi Town, which has been since retired by Bandai.

The user is presented with two options for feeding: Meal or Snack, with the Treats category from the V2 being disbanded and spread between the two. There are 4 default meals and 4 default snacks. Additional meals and snacks can be purchased at the Shop. Purchasing a food item is only good for one feeding. For more, the user must purchase the item again.

The Toilet icon is used to clean up a Tamagotchi's poop.

Within the Activities menu, the user can play games, use items, buy items, enter passwords, or view souvenirs collected from Tamagotchi Town.

There are six games: Get ♪, Bump, Flag, Heading, Memory, and Sprint. As the Tamagotchi grows older, certain games will begin to yield more Gotchi Points than before. As with the Version 2, a minimum of 3lb excess weight is required to play a game and doing well in games will reverse care mistakes.

Also released on the Shuku Keitai Kaitsuu Tamagotchi Plus, Get ♪ is available to all life stages. To play the game, the user must collect musical notes while avoiding poop. The user is presented with 3 barrels that catch notes. To cycle between the 3 barrels, use the left (A) button to move left and the right (C) button to move right. If the user catches a poop or misses a note, the game ends. To beat the game, the user must catch 100 musical notes.

Bump was originally released on the Tamagotchi Connection Version 2, and is unlocked at the child stage. The goal is to push the opponent on the ground. When "PUSH!" appears on screen, the user must press the middle (B) button to stop the power meter before each round. The goal is to stop the meter when the bar is completely full. The fuller the meter the more likely the Tamagotchi will win. However, a Tamagotchi can lose a round even if the meter was completely full. The heavier a Tamagotchi is (i.e. its weight), the higher chance of winning.

Memory is a game which has also been released on the Ouchi no Home Deka Game King, and is unlocked at the adult stage. The user uses the three buttons to repeat a pattern of arrows shown on screen. The pattern starts at two arrows, but will increase by one every three/four rounds until a maximum of eight.

Sprint is a button mashing game unlocked at the adult stage. The user must repeatedly press buttons to encourage their Tamagotchi to get to the finish line.

The Point menu allows the user to donate their Gotchi Points to the Gotchi King and obtain passwords to visit him and acquire special souvenirs as a reward. Obtaining all three nets the user the Royal Costume item.

Introduced on the Entama and the Keitai respectively, these functions allow the user to view their current Tamagotchi's parent and grandparent, several of their final stats and a password that could be used to visit them on Tamatown; and view information on their deceased Tamagotchi.

You may enter shop codes by visiting the Shop. Press the A button rapidly for 4 times until the shopkeeper makes a surprised face.

Type the shop code using the left (A) button, middle (B) button, and right (C) button.

If the player were to input all 7 passwords, the last item they obtained would be replaced by a Hohotchi Costume item. Inputting the passwords again would make the item available for purchase.

To enter a password, navigate to the Games menu, then locate PASSWORDS. Passwords are usually used to obtain souvenirs from Tamatown and work only with the correct username, but several universal ones for acquiring special items exist.

To see the king, your username must be TAMA. 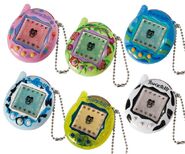 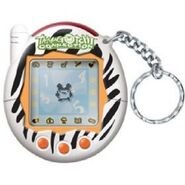 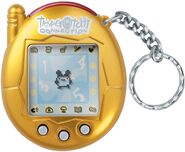 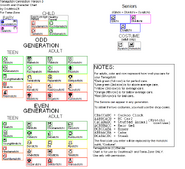