The Version 4.5 has the same mold as the UraTama. It has the same shape as most of the other Connections, with the slightly angled antennae from the Version 4. However, the shape coming from the antennae is a star instead of a ball. The four star-shaped beads on a rubber chain from the UraTama have been replaced by a silver keyring (or ball chain in some regions). While Australian releases of the Version 4 kept the bead chains, the Version 4.5 did not receive a wide release there outside of the PC Pack, so a Version 4.5 with a star bead chain is extremely rare.

In certain regions such as the UK, the Version 4.5 was released using the same ball-shaped antennae and, in many cases, the same shell designs that the Version 4 is known for.

While the UraTama had blue pixels that matched with the blue outlines of the Ura characters, the Version 4.5 had black pixels like all other Connections.

The V4.5 includes the same features used before on the Tamagotchi Connection Version 4, although many jobs and all of the games are different.[1] New items and souvenirs are also available. This Tamagotchi includes Ura Tama Town characters that were introduced in the UraTama.

The V4.5 has new skill points, which include the following categories[2]:

You may enter shop codes by visiting the Shop. Press the A button rapidly for 4 times until the shopkeeper makes a surprised face.

Type the shop code using the left (A) button, middle (B) button, and right (C) button.

If the player were to input all 5 passwords, the last item they obtained would be replaced by a Cell Phone item. Inputting the passwords again would make the item available for purchase.

A special PC Pack was released in the USA (and Australia on October 31, 2007), which includes a tree-shaped microphone that doubles as a Tamagotchi cradle, a CD ROM, a mousepad, and an exclusive V4.5 designed to represent a globe. When the CD ROM is installed, the player may use the tree microphone to interact with an on-screen Tamagotchi, or play a variety of games that rely on the user's voice. Several wallpapers, coloring activities, and screensavers are included as well.

Press images and photos on the packaging show the "Ura Flower" design in place of the globe design, but this was never actually released with the PC Pack. 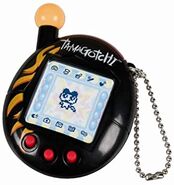 Example of a UK Version 4.5, using the Version 4 antennae
Add a photo to this gallery

Retrieved from "https://tamagotchi.fandom.com/wiki/Tamagotchi_Connection_Version_4.5?oldid=100286"
Community content is available under CC-BY-SA unless otherwise noted.