After this Tamagotchi release, the Celebrity Cruise ship was added to Tama & Earth EXPO, with all the obtainable characters aboard.

Differences from the V5

The following six games feature on the V5C. The first four are playable at all times, while the other two are unlocked at the second generation.

A maximum of 700 Gotchi is paid out for a perfect game, and the amount of Gotchi earned from a game is generally more than that of the V5. 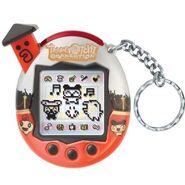 One of the shell designs.