Tamagotchi's Department Store, commonly shortened to TamaDepa (たまデパ), is a small department store themed around Tamagotchi. The most well-known TamaDepa is located in Tokyo, in the Harajuku district, although it was originally located in Tokyo dome. There is also a TamaDepa located in Tokyo station's underground "character district" later renamed "Tamagotchi store Tokyo" in late 2013.

TamaDepas are also commonly shown in the virtual pets themselves. In Tamagotchi media, Depagatchi often appears in TamaDepa stores.

The Harajuku Tamadepa originally had a doughnut shop containing eight doughnut flavors, drinks, and ice cream, and had a Kuchipatchi of Truth outside the store. Currently the main Harajuku Tamadepa moved and is merged with the fashion brand CIAO, making the Tamadepa half of its original size and located underneath the CIAO store.

In the anime series, there are multiple TamaDepa stores. Rather than containing Tamagotchi related products, they merely function as everyday department stores for the Tamagotchi population.

A TamaDepa is briefly shown in the feature film Tamagotchi The Movie, when Tanpopo is touring Tamagotchi Town with Mametchi, Memetchi, and Kuchipatchi.

A TamaDepa store appeared in episode 11 of Let's Go! Tamagotchi, when Ms. Perfect's class visits the store to get a present for her.

In Tamagotchi! and Tamagotchi! Yume Kira Dreams, there are TamaDepas located in three parts of Tamagotchi Planet. The first is the original TamaDepa that appeared in Let's Go! Tamagotchi; it is located opposite Tamagotchi School and has a dome shape. The second TamaDepa is located on Tama Street, and has a more square-like appearance. The third is in Dream Town and has a giant Tamamori decoration attached to it.

A TamaDepa store is featured as a visitable location.

There is a TamaDepa store in My Town where the user's tamagotchi lives. Depagatchi works there and will greet the tamagotchi and bring items they've chosen to buy. From the store menu, the user has the option to go shopping or go to the Tamagotchi Game Center. The store is the only location to buy rooms and jewelry. It generally carries the same stock in all versions, but there may be a few items exclusive to a version of the On. The general stock is also sold at all Tourcontchi chain stores at Tama Resort Island.

Inside the TamaDepa located in Harajuku 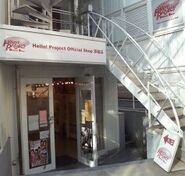 The store that was used to merge Ciao and TamaDepa

A poster advertising the TamaDepa

A banner advertising the TamaDepa
Add a photo to this gallery

Kuchipatchi inside of a TamaDepa store on the Tamagotchi Plus Color

The inside of the TamaDepa from Let's Go! Tamagotchi
Add a photo to this gallery

Retrieved from "https://tamagotchi.fandom.com/wiki/Tamagotchi_Department_Store?oldid=100420"
Community content is available under CC-BY-SA unless otherwise noted.