This article is about the Tamagotchi toy. For more articles with the same name, please see Tamagotchi Friends (disambiguation).

Tamagotchi: Digital Friend, better known by the simplified name Tamagotchi Friends, is a virtual pet toy of the Tamagotchi franchise released in Spain, Poland the United Kingdom on December 26, 2013. It was later released in Belgium, Germany, and France in early 2014 and in Russia later on in May 2014.

Along with the virtual pet, the series included additional merchandise, such as toy sets and character figurines. The new website, replacing what was originally Music City was released on November 23, 2013, featuring character biographies, news, and games. The toy line has been nominated by Time to Play in the People’s Play Awards for Toy Tech in October 9, 2014. [2]

The design of Tamagotchi Friends strongly resembles the Tamagotchi iD L. There is a plastic frame surrounding the front of the shell, and a faceplate that may either have a printed patter, or be translucent, revealing diamond-like effects around the top left and bottom right. It has a 4-part greyscale screen, similar to that of the TamaTown Tama-Go. The initial release has no background printing; later production models and all USA models have printing on the top and bottom edges, forming the rows for the icons. The Tamagotchi Friends has no infrared port; all connecting features are done through NFC technology. The unit takes 2 AAA batteries, which are loaded into a battery compartment at the bottom of the unit, which is held in by a single screw.

Character sprites are also significantly revised from previous models. The sprites are now larger, with the biggest size up to 20x20 pixels, and sprites now include shades of gray for certain character features.

Tamagotchi Friends features a new method of communication replacing infrared called "near field communication" (abbreviated as NFC) that allows two toys to interact when touched back to back. This method is called "bumping." By doing this, players can visit their friend's Tamagotchi, exchange presents, send messages, and earn Gotchi Points. The number of times Tamagotchi Friends can bump with a friend is limited to 5 per day. The number of connections remaining for a day is indicated at the clock screen by the number of hearts appearing underneath the time display.

During the initial setup of the Tamagotchi Friends, after setting the clock, the user must choose between three eggs; one of them with spots, one with stripes and one with a heart shape. Each time the Tamagotchi marries afterward, the egg will always appear as the same one chosen. For the First Generation, the baby born is random. In subsequent generations, the egg will have a small influence over the gender for the babies born; the spotted egg is random, stripped egg is more likely to produce boys, and the heart egg is more likely to produce girls.

A special new meter, called the BFF meter, is located under the Check meter. Connecting to another Tamagotchi Friends unit will gradually cause the meter to fill. Filling the meter at least halfway is required to unlock the Flower Count game.

The fourth icon is the "Door" icon. Selecting this allows the Tamagotchi to leave their home and explore various locations.

Each version of the Tamagotchi Friends features five games, with three available at the start, and two unlocked later. The European and North American version have different games for the initial three, but the two unlocked games remain the same for both.

The three standard games on the European version are:

The three standard games on the North American version are:

The two unlocked games are:

The second travel option is the shop, where the user can buy meals, snacks, and jewelry.

In the third travel option, the user's Tamagotchi can visit and play with other characters. The five characters featured at the park (Butterflytchi, Doyatchi, Hanafuwatchi, Amakutchi, and Karakutchi) are unique and cannot be raised.

The fourth travel option is to connect to the Dream Town online game. When selected, a code to enter on the site will appear. Pressing the B button will allow the user to type in the logout code from the site.

Once the Tamagotchi has been adult for a long enough period of time, the Date Place will become accessible as the fifth travel option. The user's Tamagotchi will be presented with three possible partners, and may choose one of them to marry. The chosen partner will live with the user's Tamagotchi, and the baby for the next generation will hatch.

The mail icon serves as the sixth icon. Here, the user can type messages to send to other Tamagotchi units through bumping. The unit can store up to six letters; if a seventh letter is saved, the oldest letter in the inbox will be removed.

Jewelry are special items that can be collected at the jewelry shop and can be viewed in the chest icon. The are four different types of jewelry, with 15 of each kind available: crowns, necklaces, bracelets, and rings. 48 jewelry pieces can be purchased from the store, 6 are gifted at random when the Tamagotchi evolves to an adult not raised on the unit prior. The remaining 8 jewelry pieces are unknown. Collecting at least 30 jewelry pieces is necessary to unlock the Cake Catch game.

While the Tamagotchi does not die, severely neglecting the Tamagotchi will cause it to become frustrated and run away, leaving an image of a letter with the words "Bye Bye" beneath it. Pressing the A and C buttons together will make a new egg appear.

An app and interactive clothing line called Tamagotchi Friends: Gotchi-fy! was created by Bandai America and Sync Beatz Entertainment. It was released in the United States and Canada in 2014.

The Tamagotchi Friends website had character profiles, news, products, and webisodes based on the Tamagotchi! Yume Kira Dream anime. It also had mini-games and a new TamaTown based on Dream Town. The site was shut down in 2019 to make way for the Tamagotchi ON.

A webisode series of Tamagotchi Friends is also available. The series is mostly based on the second Japanese Tamagotchi! anime, Tamagotchi! Yume Kira Dream. The majority of the webisodes featured portions of major scenes from the anime put together. The webisodes are available in three languages: English, French and German. They are also subtitled in Spanish.

The first six designs to be released 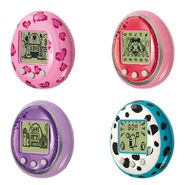 Side on stock photo of Tamagotchi Friends

All six Tamagotchi Friends in packaging

Close up of Tamagotchi Friends packaging

Toy fair Photo, including the six US designs 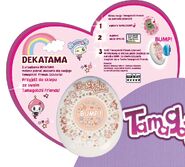 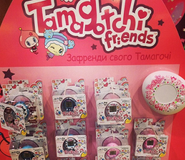 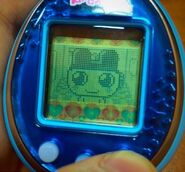