Pet Simulator
Tamagotchi L.i.f.e. (Love Is Fun Everywhere) was a brand of Tamagotchi mobile apps and accessories. It was distributed by Sync Beatz Entertainment Inc.

It was labeled under a "Lifestyle brand" consisting of apparel, home décor, furniture, and many other novelties, primarily aimed at women ages 20–29. The brand also has fashion style webisodes produced by Anz Falcon. There was no specified release date for any of the products. In 2014, child actress Jennette McCurdy was named the official brand ambassador.

An app for Android based on the original Tamagotchi was released in early 2013, followed shortly after by a version for iOS. Version 1.2.0 of the app brought an option to play the second generation. An adaption of Tamagotchi Angel launched on February 26, 2014, along with a new minigame app Tamagotchi L.i.f.e. Tap and Hatch. Both apps are no longer available since December 15, 2014, though the apps themselves still function if they had already been installed.

The brand was officially discontinued in January 2015, with the website thanking fans for their support and redirecting them to the Tamagotchi Friends site.

The Android application based on the original Tamagotchi was released in early 2013, and an iOS version followed shortly after. The app was available for free, only in US and Canada; the only in-app purchase is to remove the in-game advertising banner for $0.99. It is a direct port with all of the functionality of the original toy, with several additional features.

The app includes a "Color Mode" where the view can be changed to view the pet with a larger, colorful sprite. Adults have three color variations, and for each character (and their variants) raised, the user earns a star. As the user accumulates stars, they unlock new shells (for the virtual pet viewing mode) and backgrounds (for the color view mode). The shells and backgrounds are different for generations 1 and 2. Additionally, Color Mode offers a different game to play from the normal game. For generation 1, the game is "Rock, Paper, Scissors", while generation 2 has a card-matching game.

The app also includes background music, which may be toggled on or off. The app can be connected to Facebook, allowing users to share their Tamagotchi's progress across social media. The app also has push notifications, so the Tamagotchi can call for attention even when the app is not actively running.

After the brand's discontinuation, the Tamagotchi Classic app was released in the US and Canada to replace L.i.f.e. The original version of the app is incompatible with iOS 11 or later.

The "2nd Gen." app was later removed from international app stores, and like Tamagotchi L.i.f.e, is not compatible with iOS 11 or later.

An adaption of the Tamagotchi Angel was released as a second app on February 26, 2014. It includes similar functionality to the first Tamagotchi L.i.f.e. app, and includes several Angel shell designs unique to the app. The full-color mode includes a new game where the user must tap 20 stars in order before the timer runs out. Cactus Angel is featured prominently in promotional artwork and can be found in the game data, but only Smiling Angel can be obtained through normal play.

Internationally, the app was released as "Tamagotchi Angel", being almost identical to the US release aside from the app's logo and icon. The song featured in the star game was also changed between versions.

The app was never re-released in the USA and Canada, and the international version was also eventually removed from app stores. As such, both versions of the app are incompatible with iOS 11 or later.

The original Tamagotchi app has been downloaded over 3 million times on both Apple and Android deices, and has generally positive reception by many major gaming news websites. All three apps currently score 4.5 stars out of 5 in the iOS app store, and scores on the Android market average at 3.8.

After the release of the first webisode on YouTube, there was a major backlash from the Tamagotchi fanbase for not having content relevant to Tamagotchi, eventually leading to comments on the video being disabled. 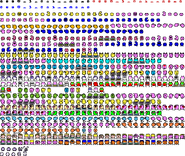