Tamagotchi L.i.f.e. Tap and Hatch was a mobile puzzle game developed by Bandai Namco Games for Apple and Android devices, and released in February, 2014. The game was free of charge, but offered in-app purchases for power-ups, extended time, and extra lives.

The game's in-app purchases were disabled on September 1, 2014. The app was terminated on October 1, 2014, and has been removed from the iTunes store and Android market.

Each of the 125 levels presents the player with a board featuring several different color blocks. Any group of three or more blocks of the same color can be cleared by touching one block, and drawing a line from it through the other identical blocks. Blocks can be connected vertically, horizontally, and diagonally, and more points are awarded for longer connections. If there are no possible moves left, the game will automatically shuffle the pieces around.

The objective is to connect the blocks while clearing stated objectives, which vary between levels. In most cases, the player must complete the challenge in a limited number of "moves". Each level begins with an egg, and as the score goes up, the egg hatches. Each tier of Tamagotchi growth rewards the player with a star (up to three stars per level), and stars are required to continue onward to later areas.

If there are leftover moves, time, or Potty Bombs when the player completes a challenge, they are factored in as bonus points. Upon completing a challenge, the player is permitted to move on to the next level, regardless of how many stars they earned.

Hearts are necessary in order to play any of the levels. Hearts are lost if the player loses or forfeits a game. The game will automatically restore a Heart (for a maximum of five) every thirty minutes. Before September 1, 2014, the player could also purchase Hearts in bundles. Hearts are not consumed when playing any of the Generation 1 levels.

Achievements are earned when completing specific objectives. Each achievement also gives the player one of the premium Boost Items to use. Achievements include:

Blocks that appear during levels include the following:

While the game is free, the game provided purchases that could assist the player in winning the game. They are introduced at level 6. As of September 1, 2014, all purchases have been disabled. The purchases included:

Tap and Hatch includes characters and locations based on the following themes and releases: 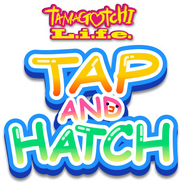 App closing notice
Add a photo to this gallery

Retrieved from "https://tamagotchi.fandom.com/wiki/Tamagotchi_L.i.f.e._Tap_and_Hatch?oldid=101325"
Community content is available under CC-BY-SA unless otherwise noted.