The Tamagotchi Mini (ちびたまごっち Chibi Tamagotchi) is a miniature virtual pet that acts as a homage to the original Tamagotchi. It is the second worldwide Tamagotchi release since the 2004 relaunch. Due to its small size, the Mini is often treated as a fashion accessory.

As part of Tamagotchi's 20th anniversary celebrations, the Tamagotchi Mini relaunched in Japan in April 2017 and in the United States in November 2017.

The Tamagotchi Mini is a miniature virtual pet that measures at about 4 centimeters tall, or about 1.57 inches, making it the smallest virtual pet in the franchise. The screen is 16 pixels wide by 16 pixels tall, half the size of the original Tamagotchi's screen (32 by 16 pixels). The screen has a printed background and no icons.

One minute after setting the clock, the egg will hatch into Marutchi. If Marutchi is hatched after 8 PM, it will stay awake for one minute before going to sleep. After 24 hours, it will evolve into its adult form. If the adult lives for seven days, it will become a secret character; in all versions of the pet, Mametchi will become a different character than the other three adults.

As the screen has no icons, the A and C buttons become context-sensitive buttons.

The C button serves as the Check meter function. If the Mini needs something, pressing the C button will trigger an animation. If the character gets a dizzy look and spins around, then its Hungry meter is empty. If they turn away from the screen and sulk, its Happy meter is empty. The animations will only trigger if the meters are completely empty; if both meters are partially or completely filled, no animation will play.

The A button is the "Function" button. When used, if the Mini needs something, the function will be carried out. This includes feeding meals and snacks, turning the lights on and off, cleaning poo, and treating sickness. The "A" button prioritizes certain functions over others, with feeding as the lowest priority, sickness as the middle priority, and cleaning poo as the highest priority. Therefore, the user must clean poo and cure sickness before the Mini can be fed. When the Mini goes to sleep, pressing the A button will show the lights on and off menu, allowing the user to turn the lights off.

The "B" button shows the clock. Unlike other Tamagotchis, and much like the Tamagotchi Nano, only hours and minutes are displayed. Pressing A and C together allows the user to change the time.

Pressing A and C together brings up the menu for turning the sound on and off. On the 2005 English edition, pressing A and B together will pause the Mini, showing an exclamation mark hovering over the character. This is not present on the 2017 edition.

The Mini has the traditional "Hungry" and "Happy" meters, each consisting of four hearts, but are not visible to the user. Pressing the A button when either meter is partially or completely empty will bring up the Meal and Snack menu, with meals filling the Hungry meter and snacks filling the Happy meter. On the original release, if both meters are filled, the A button will do nothing. On the 2017 edition, the A button will still bring up the food menu even if both meters are filled.

The meal on the original Japanese release and 2017 rerelease is a bowl of rice. The meal on the 2005 English release is a bagel. The snack on all three versions is a piece of candy. On the Good Luck version, the meal is a fish and the snack is mochi.

The Mini will leave poo every three hours, and can have a maximum of six poos on the screen. If poo is left on the screen for too long, and calls to fill the Hungry and Happy meters are ignored, the Mini will get sick.

When the pet dies, the Japanese and 20th Anniversary versions shows Obaketchi floating next to a grave, while the 2005 English version shows the Tamagotchi being lifted into a UFO and flying away to the Tamagotchi Planet. It can either die at the approximate age of 15, or prematurely if the user either allows its meters to remain empty, or stay sick, for a full 24 hours. At the Death screen, pressing A and C together will give a new egg.

One of the Destiny's Child editions. 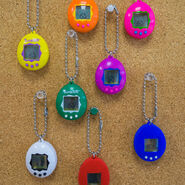 Promotional image of the 2018 Series 4 shells.