At all times, two items will be present on the Tamagotchi's screen: an instrument on the right of the screen, and a toy on the left. Every 15 minutes, the character will use either of these. Every Tamagotchi has its own preferred toy; if the right one is chosen, it will decrease stress when used, while the wrong toy will increase it. Using a toy for too long may also cause skill points to decrease. Instruments will increase skill points but also stress. Praising it when it practices will negate the stress increase. The user can also freely give the Tamagotchi either item using the Training icon. A Tamagotchi with high levels of stress may refuse to use the instrument and become more inclined to play instead.

There are 20 toys and 21 instruments. One toy and one instrument are gifted during the First Generation, and new ones can be earned later on throughout the Tamagotchi's life.

During the teen stage, the Tamagotchi will meet two other characters and form a band, which the user will be prompted to name. Once the user's Tamagotchi becomes an adult, the other two bandmates will evolve upon their next meeting. The bandmates will each have a name for them generated for them automatically. The instruments of the band members can be viewed and changed in the Check Meter; doing so will influence the genre they perform.

There is a total of 60 food items: 2 which the user always has, and 58 more (29 meals and 29 snacks) that can be purchased at the Shop. In addition, there are also the "Baby Food" (meal) and "Baby Milk" (snack) options that are always available. However, they stop filling the Hungry and Happy meters once the Tamagotchi becomes a teen.

Taking the place of the game icon from previous versions, the Music icon allows the user to play one of three games to raise skill points, or change the toy and instrument on the main screen.

The games are as follows:

Once the Tamagotchi has become an adult, the band will be able to perform in front of a panel of three judges (Bill, Big Boss Gotchi, and Gulasantchi) to get the chance to become a professional band. The band will perform a song, and the three judges will each hold up a sign reading "O" (good) or "X" (bad). If the result is three "O's", Guitaritchi will take over as the band manager. Each member receives 10,000 Gotchi Points. However, if a band is given an "X" they will begin their career as street musicians. If this happens, there will be another chance to pass every day at 2:15, 4:15 and 7:15 pm every day until the band passes.

Different aspects of the performance are assessed by different judges. Bill will judge the player's Tamagotchi's overall status; this includes hunger, happiness and stress levels, music skills and the amount of time spent practicing at home. Praising it when it practices will increase the chance of Bill awarding the band an "O". Big Boss Gotchi, will most likely award an "O" if Bill has given an "O". The third judge, Gulasantchi, judges on a band's overall status; this includes how often they have practiced together (by playing the games "Music School" and "Music Studio" and having successful sessions), whether they have the right instruments for their genre, and whether or not they have performed in enough concerts as street musicians (if they were turned down first time).

After a band's first judged performance, going to the clock screen will show a "Star Ranking" and "Tama Fans" screen below the clock.

"Star Ranking" shows the band's ranking compared to other bands. The band will begin at 999th place if they fail their professional debut, and will only increase once they pass. Band practice, concert performances, and good care will increase the Star Ranking. "Tama Fans" shows the amount of fans the band has, and gradually increases as the Star Ranking increases, capping at 999,999,999.

Once the band has made their professional debut, they will be able to perform at professional concerts, which occur at 5 PM, 6 PM, and 7 PM each day. Completing each concert improves the Star Ranking and Tama Fans. If a band performs a concert while at 1st place in the Star Ranking, a special trophy for that musical genre will be added to the trophy collection in the Notebook icon. Selecting the trophy will show a replay of the concert.

After having been an adult for three days, Guitaritchi will take the role of a matchmaker and bring other characters to visit for the user's Tamagotchi to marry. Bandmates of the opposite gender may also visit and ask to marry. In both cases, the marriage partner will come live with the user's Tamagotchi and they will produce a baby. The parents will leave after two days, and while the baby will inherit all food, items, instruments, and toys, they will only inherit a portion of the parent's skill points and Gotchi Points.

The Music Star can connect to the Tamagotchi Connection Version 5, the V5 Celebrity, and the TamaTown Tama-Go. It can receive marriage partners from either V5 model, which will be rendered as Nazotchi. It can also marry the Tama-Go, making it the only version the Tama-Go can marry other than itself. 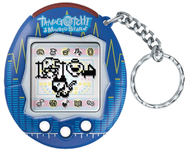