Initially, the name "Tamagotchi Nano" was only used for the first two virtual pets in the series, and all releases are referred to internally as "Tamagotchi Nano" models. In August 2021, Bandai Japan reintroduced the name as its own distinct brand of Tamagotchi pets. As of June 2022, Tamagotchi Nano has a total of 28 different versions, more than any other Tamagotchi franchise.

The Tamagotchi Nano is a miniature virtual pet that measures at about 4 centimeters tall, or about 1.57 inches. It has a rounder, more egg-like shape, making it thicker than a normal Tamagotchi and slightly bigger than the Tamagotchi Mini. The front of the shell has a droplet-shaped frame around the screen with three buttons below, and the screen itself is deeply recessed into the body of the shell.

The battery panel has a rectangle with "cracked" patterns on the left and right side. At the bottom of the battery panel is either a pressure-sensitive tab or a screw, depending on the model. Like the classic Tamagotchi, Nanos take two LR44 batteries. The speaker is at the top of the back, and the two screws needed to open the unit are covered by plastic tabs, which must be broken off to access them. The "Reset" button is on the top right, below the right screw and above the battery panel.

In addition to the standard mold, the first wave of original Tamagotchi Nano models featured a mold with a crystal-like outer frame, which has not been used since. The Pac-Man Tamagotchi and the Hello Kitty Tamagotchi both use a unique mold different from Japanese models. The droplet frame and shell front are a single mold, making the gap between them thinner and allowing graphics to be printed over it. The two screws on the back are uncovered.

The classic Nano models and the Pocket Usatama 2017 feature a 24x24 pixel screen. From the Gudetama Tamagotchi onward, all Nano models have smaller pixels but a wider screen of 30x24 pixels.

The initial two versions of the Tamagotchi Nano are distinguished by the background print; the first version's background has a floral pattern at the upper right and bottom left corners of the screen, and the second version's has a wave pattern across the top and bottom halves of the screen. There are three shells exclusive to the Tamagotchi Department Store which have the store's logo as the background. None of the licensed versions released afterward have had background prints.

Menus on the screen are typically portrayed with Japanese or English text. Later models have used graphics for the menu options instead, allowing models to be distributed globally without the need of translating the device's text.

All Nano cases feature a droplet-shaped hole to insert the Nano inside, which leaves the frame, screen, and buttons of the Nano exposed while the rest of the shell is protected. This allows the Nano to be used without removing it from the case. Cases will always have a hole on top to insert the ball chain, and most cases have a round hole for the Nano's speaker. Some cases, including the sitting Gudetama case and the Pac-Man case, have a flattened bottom, allowing it to stand upright on a flat, level surface.

A Hugmy Tamagotchi is a desk accessory used to hold a Nano upright on a desk. They are approximately 4 inch tall collectible character figures made of soft vinyl and have articulated arms and heads. Their arms and legs are set to position where they can hold a Nano securely, with the legs having indents. While the figures can hold a Nano security with or without the chain, removing the chain is recommended. As with cases, any Hugmy Tamagotchi figure can hold any Nano model.

Several Nano models were accompanied with special accessories, either bundled with the unit or sold separately. The Pocket Usapiyo's cases were each bundled with lanyards. Preorders of the Evatchi at the official Evangelion store in Japan came bundled with charms featuring the sprites of Sachiel, Zeruel, and Gaghiel. The Twistetchi comes bundled with charms matching the dormitory the shell is based on. Lanyards were also made for the Jujutsutchi and Kamen Ridertchi, but were not available at retail; the Jujutsutchi lanyard was exclusive to Jump Festa 2022, while the Kamen Ridertchi lanyard was sold exclusively at the Kamen Rider Store.

The baby of the pet is born after the clock is set. On the original Tamagotchi Nano models, the Pac-Man Tamagotchi, and the Hello Kitty Tamagotchi, an egg appears and hatches after one minute. On all other licensed models, an introductory animation plays instead.

Once the pet is born, its growth is determined by the quality of the user's care, their game performance, and other influences depending on the model. On most models, it takes 24 hours before it evolves into its next form. On some models, there may be secret forms it can evolve into once certain conditions are met.

Tamagotchi Nano models have no on-screen icons, and therefore all information is conveyed through the screen and buttons. The pet is cared for by filling its meters; they have Hungry and Happy meters, each consisting of four units, which are both empty when they're born. On all models, the Hungry meter decreases by one unit per hour, and the Happy meter decreases by one every 50 minutes. If either becomes empty, the pet will call for attention to fill them.

The user can press the C button for an animation to see what it needs. A dizzy spiral signifies an empty Hungry meter, while a sulking lines signify an empty Happy meter. Once the meters are not empty, the animation will change, typically to a Close Up. On some models, there are different animations depending on whether the Happy meter is partially or completely full.

Pressing the A button opens the main menu, with the first option for the food menu, and the second option for the games. The meal option fills one Hungry unit, and the pet will refuse to eat anymore once the meter is full. The snack fills one Happy unit, and can be fed even when the Happy meter is full. The A button is also used to open the lights on and off menu when the pet has fallen asleep. Babies sleep at 8 PM, while adults sleep at 10 PM. All pets wake at 7 AM, and will turn the lights on themselves when they wake up.

The initial Nano models, the Pocket Usatama 2017, and the Gudetama Tamagotchi all feature one game each. From the Eevee x Tamagotchi onward, all models have at least two games, with the exception of the Extellatchi. Games increase the pet's Happy level; winning the game fills Happy by one unit, while a perfect game fills Happy by two. On most models, which games are played in the pet's life may determine its evolutions.

Several minigame templates have been reused between models:

Obstacles are events that happen that prevent the user for caring for the pet. These may include the pet making a Poo, a dirty room, attempting to run away, being attacked, among many other possibilities. The user will not be able to feed or play with the pet until the obstacle is cleared by pressing the A button. If the user doesn't respond for a long period of time, the obstacle will have a larger impact on the screen, such as poo accumulating or the room becoming dirtier.

Severely neglecting the pet, or allowing an obstacle to stay around for too long (for example, failing to clean poo for a long time), will cause an ailment to happen to the pet. This typically includes Sickness or sulking. The A button must be pressed twice to alleviate this condition. Like with obstacles, the user cannot feed or play with the pet until the condition is cared for.

On early models, the pet would perform a Close-Up animation each day at 10 AM, 2 PM, and 6 PM.

On later models, special animations play at specified hours throughout the day, each inspired by the franchise the model is based on. These animations will stay on screen for three minutes before disappearing on their own. Pressing any button will end the animation, but in some cases may trigger an additional animation to play.

After a prolonged time, the pet will leave its owner. Each model has its own unique departure sequences, including Death, but many have more than one sequence. Typically, there is a "good" ending sequence, and a "bad" one. Regardless of which ending occurred, pressing the A and C buttons together will trigger the life cycle to start again from the beginning. 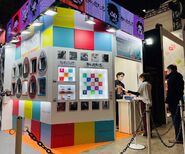