Like the m!x, The On/Meets/Some has no icons on the main screen, instead having the animations take up the screen's full resolution and the 10 icons appearing when A is pressed, with each icon's function appearing in a text box above. The Attention icon doesn't appear among the main icons, instead appearing at the top-right corner of the screen if the Tamagotchi calls.

Similar to its predecessor, the On comes in multiple versions with different m!xable characters and exclusive locations. Two versions, Fairy and Magic, are available in all territories.

The Tamagotchi On retains the m!x feature from the Tamagotchi m!x. While raising the Tamagotchi is the same as other releases during the first generation, from the second generation onward, the new child will take on the physical characteristics of its parents. The traits start simply with the baby stage's body colors, but they become more distinct as it evolves. Some traits may disappear after several generations and then suddenly resurface later. By connecting and marrying two different versions, physical traits inherited from a character exclusive to one version can be carried over to another.

From the second generation onward, there is a chance twin babies will be born instead of just one. The babies may grow up to be identical or inherit different genetics as adults. When it comes time to marry them off, the user is able to choose which twin to marry.

The Tamagotchi can now have a Tama Pet, and the pet may produce its own m!xed offspring with another Tama Pet. Tama Pets are lured in by leaving a toy outside, and then checking later to see if one has appeared. The user can then choose whether or not to keep it. The Tama Pets available vary between versions. Tama Pets marry and produce offspring either by meeting another one outside, or by connecting to another device and letting the pets play together.

The Happy Meter is a meter in the status screen. It is measured in points (up to 100), visually represented by 18 colored bars. Baby, child and teen characters can only fill the bar halfway (45 points), while adults can fill it entirely. How full the meter is determines how the Tamagotchi moves on screen and interacts with the user, as well as influencing child and teen evolutions. From the second generation onward, it has a small influence on what genetics are inherited.

Happiness gradually depletes over time, and can be filled by feeding snacks, playing games, using toys, meeting other characters via travelling, connecting, using the app, and by using the toilet. If the Tamagotchi is seen sulking in the corner, then its Happiness is less than a quarter full.

The Food menu list is separated by two options: Fridge and Restaurant. The Fridge contains the default foods, as well as any food the user has bought. In the Fridge, an icon on the top right indicates what kind of a food it is (a rice bowl for meals, and a piece of candy for snacks). The restaurant lists meals and snacks separately, and all foods require Gotchi Points.

Certain foods will change the Tamagotchi's body color if eaten five times. These colors include yellow, red, blue, white, pink, purple, and grey. The Tamagotchi can also inherit colors and colors based on color mixing from their parents or grandparents.

The Bathroom icon can also be used to bathe the Tamagotchi in a bathtub. Failing to bathe the Tamagotchi for 24 hours will make it appear dirty, which may lead it to getting sick. Additionally, the living room must also be cleaned using the Vacuum option in the Item Box. If not cleaned for 24 hours, it will also become dirty, which can lead to sickness.

The fifth icon on the menu is the Family icon. This allows the user to check the Tamagotchi's lineage and see a family photo. From the second generation onward, this icon can also be used to visit the Tamagotchi's parents.

There are two icons dedicated to travel. One is for the My Town's locations, and the other is for the Tama Resort locations, which are gradually unlocked through play.

Each location includes a park, a shop, an event spot, and the option to marry. At the park, the Tamagotchi can meet other characters that live there and, if the user has the correct items, the Tamagotchi can become friends with them and later propose to them. The shop allows the user to buy special items exclusive to that location. The event spot lets the Tamagotchi see an animation or play a game pertaining to that town.

When connecting two units together, an option is available to travel to one of the unlocked locations. If the invited Tamagotchi has not unlocked the location yet, it will immediately unlock after the connection animation is complete. This does not work when traveling to locations that aren't available on the other unit.

There is some compatibility between the m!x, On, Meets, and Ssome. Compatibility ranges from none at all to some functions to being fully comparable with each other and their respective apps. The Regional Compatibility Chart shows the full list of available functionality.

The Tamagotchi will periodically become sick throughout its life. It naturally gets sick within a few hours of evolution, but can also get sick through neglect, such as allowing it or its room to stay dirty for a long period of time, or allowing Poo to accumulate. If the Tamagotchi is fed snacks too quickly, it will get a toothache. Both are cured by using the First Aid icon.

The Tamagotchi Meets App and Tamagotchi On App are special tie-in apps. The Meets app was made available on mobile OS systems on November 10th, 2018, while the On app was released on July 28, 2019. The user can send their Tamagotchi to a plaza, where they can play games, collect items and Gotchi Points, and marry other characters. The app also periodically distributes exclusive items and characters, beginning with Okazarutchi in February 2019.

Both apps use the same firmware, allowing any Tamagotchi to connect through it, even if the languages are different. Food, items and backgrounds transferred from either app retain their native language name (for example, a food from the Meets app will have its Japanese name displayed on the On). As the lobby allows for marriage between Japanese and English versions, it's possible to inherit genes not normally available internationally, such as those from the Meets Station, from previous marriage events, or from the Pastel, Sanrio, or Fantasy versions.

The Meets App was shut down and taken off app stores on February 28, 2022. Bandai America announced that the Tamagotchi On app would be discontinued on August 31, 2022.

The Tamagotchi On had two types of neck straps released exclusively in Japan.

These were lanyards that had a loop at the end to attach the Tamagotchi On to, allowing the user to keep the device hanging around their neck. The standard lanyards were sold for 990円 and four designs were released: 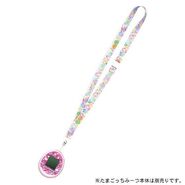 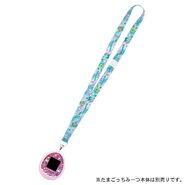 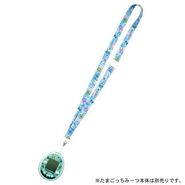 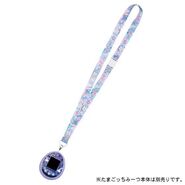 These were lanyards that came with a set of charms in the form of small plastic triangles. The charms featured characters from the On and had an empty space where the user could write their Tamagotchi On app ID number and name. They could then exchange the charm with other people and collect their charms on their own lanyard. The Tomo Charm sets were sold for 1,320円 and three designs have been released: 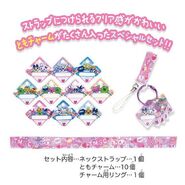 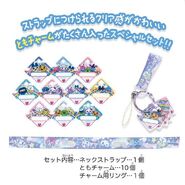 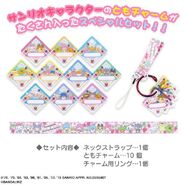 The Tamagotchi On is known to have some glitches affecting gameplay on all versions.

All of the English versions' shells (except Magic White) 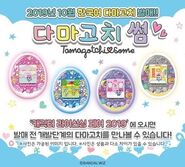 All of the Korean version's shells

An explanation of the m!x feature

List of things to do on the Tamagotchi On

The base characters for most versions

Image showing the addition of twins 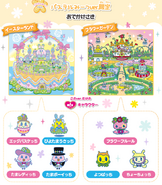 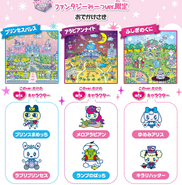 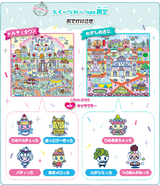