On February 28, 2022 the Tamagotchi Meets app will be shut down and taken off application stores. There is no word yet if the same will happen for the Tamagotchi On app.

Similar to TamaTown and Tama & Earth EXPO, the Tamagotchi On App allows a tamagotchi to visit a virtual world, play games, earn Gotchi Points and items, and then return to their device. It requires an iPhone, iPad, or Android device to run, and Bluetooth must be enabled. The user's tamagotchi can also get married to other player's tamagotchi characters, including special monthly guests exclusive to the app.

The Tamagotchi Ssome cannot interact with the app due to lacking Bluetooth. While genetics from app-exclusive partners can still be inherited from connecting to an On or Meets unit, it cannot receive any foods, toys, accessories, or wallpapers.

The Tamagotchi m!x has limited connectivity with the app. A generated password from the device must be entered into the app in order to transfer the tamagotchi into it. The tamagotchi will then have five minutes to walk around the park and play the available games until they are booted out of the app. During this time, the tamagotchi cannot propose or be proposed to. The limited connectivity was from the m!x being used to test the servers of the app as the app was launched before the Tamagotchi Meets officially released.

The app can bring a Tamagotchi in from a Tamagotchi On or Meets device, and be returned afterward. The App can store the data of up to three devices; if a fourth device attempts to register, one of the three other devices must be removed first. Any On or Meets model can connect to either version of the app, regardless of language. Once the user's Tamagotchi character is brought into the app, it will appear in the park, when playing games, or when visiting Tama ❤ Party.

Additionally, characters raised on LINE de Hakken!! Tamagotchi can be brought over to the app, but can only travel through the Meets app.

When a Tamagotchi character is brought in from a device, the user can update their profile image and set their location and birthday. Additionally, they can view their Tamagotchi's entire family tree and a history of the last 5 iterations of the tamagotchi that has visited the app.

The Park is the central location of the app; all users currently playing the app will have their Tamagotchi appear here. If the user has not brought in a Tamagotchi from a device, one character will be randomly generated for them. Users can view the profiles and family trees of other Tamagotchi characters, send "Likes", and propose to marry. Additionally, they can interact with the monthly guest who, in some cases, may distribute limited time items. From the Park, the user's Tamagotchi can interact with the Tama ❤ Party and the Arcade.

The Arcade is a game center in the park. The game is a catching game, and the kind of objects and scenery change based on the season. The objective is to catch as many objects as possible within 50 seconds, while avoiding hazards to earn a high score. The user moves their Tamagotchi characters left or right by tapping the left or right sides of the screen. Tapping twice quickly will make the Tamagotchi character jump. If the user has twins, they will have a wider space to catch more items, but in turn become more vulnerable to falling hazards.

Point values of falling objects start at 10 and 20 points each. As the game progresses, object will fall faster and higher value objects at 30, 50, and eventually 100 points will appear. Once the game is complete, the user will be shown their score and awarded a prize based on their performance. Prizes change every month, and may be viewed on the Bulletin Board on the home screen.

The matchmaking party begins with Applitchi introducing the contestants, which are four male and four female characters. There are two rounds of "Discussion Time" and two rounds of "Party Time". In Discussion Time, the user's Tamagotchi character will present a possible partner that they're interested in, and the user can select "Yes" or "No". Each Discussion Time is immediately followed by Party Time, where the eight characters will mingle in the room.

Once two rounds of Discussion Time and Party Time have been finished, it is followed by "Selection Time". The male characters will propose to the female characters, one by one, until all four males have proposed. However, up to three male characters may be interested in the same female character; in cases where more than one male is interested in the same female, the other males will interrupt the first male's proposal. Females can either accept or reject a proposal; if they accept, the male will join his partner on the other side of the room. Once a male has proposed, it cannot propose again until it leaves and returns for a new round.

Following a successful proposal, the user will be asked to either to accept or reject the marriage. If accepted, they will be prompted to connect their device back to the app, which will return the Tamagotchi to the device, along with an egg. If the user is using a randomized guest character, or a LINE character, the date sequence will play, but at the end, the two characters will decide to be "just friends" and part ways.

Exclusive to the Japanese version of the app, the GPS Play will reward the user a prize based on their current location. All prizes are limited to Japanese locations.

Tamagotchi Restaurant is a second game, found separate from the Park. In this game, the user will have 50 seconds to serve food to a line of Tamagotchi characters. They will approach a counter and food options will appear, and the character will ask for one of them. The user must tap the correct option to move on to the next character in line. Point values increase as the game progresses, while the amount of food options increase. Once the game is complete, the user will be shown their score and awarded a prize based on their performance. Prizes change every month, and may be viewed on the Bulletin Board on the home screen.

All of the Gotchi Points, foods, toys, accessories, and room designs earned or given in the app are stored here. In order to send them to the Tamagotchi, the user must first select an item and then the amount of Gotchi Points they would like to send with it. Presents cannot be sent to a device that has their Tamagotchi character visiting the app. Some characters such as Colorfulrabbitchi might give presents everyday until a certain date.

Completing certain task on the Challenge list will reward the user with exclusive items. Once the user has completed a challenge, a window will appear showing the item won.

There are sometimes events celebrating a holiday, release of a Tamagotchi Meets, or crossovers with other media. The park will usually be decorated and the monthly guest will give a gift to the user's tamagotchi if they interact with them. For some events, the games will receive a facelift and there may be a shop to buy exclusive items from.

A player's profile showing their avatar and tamagotchi

The history page of the user's tamagotchi

The challenge board showing the user's progress on challenges

The bulletin board showcasing the current month's prizes

Catching Flowers title screen as it appears in spring

A wedding taking place in the app

The park themed after Puroland during the Sanrio event

The Sanrio shop where collaboration points could be spent 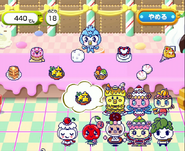 Tamagotchi Restaurant during the Sweets Event

The park during the launch of Tamagotchi Meets Sweets version

The park themed after Valentine's day

The park during the Easter Event

Tamagotchi Restaurant during the Sanrio Event