The Osutchi and Mesutchi is larger than the original Tamagotchi pets, measuring at about 5.6cm tall and 4.8cm wide (about 2.2 inches tall by 1.9 inches wide), the same size as the Tamagotchi Connection virtual pets. The top features a removable cap, and inside held two small, square conductors. This is used to attach the two toys together and initiate the marriage process. Their screens are 18x29 pixels, taller than the screens of other vintage releases but narrower.

The Osutchi and Mesutchi were sold separately from each other, with the exception of the anniversary editions, which had a pair bundled together. It was marketed to encourage people to raise one Tamagotchi, and then seek out someone else with the opposite unit to marry once the Tamagotchi was an adult.

In August 1997, market test versions of the toy saw a limited release in Japan. They only came in the blue and pink shell design, and around 1,440 pairs were produced. The packaging for them is nearly identical to the final version, except there is a red oval at the top left corner reading "新登場!!" (Shin tōjō!!, meaning "Introducing!!") in white. The back of the packaging also shows Bunbuntchi and Bunkotchi in futons. Included with the instructions is a two-sided survey sheet; those who received the test versions were meant to fill the survey out after running the pets and send it back to Bandai.

Functionally, they were identical to the final versions, save for a few animation differences:

According to Mikachu's logs, gendered Tamagotchi characters were a new discovery made while the Tamagotchis were living on Earth, and had not previously existed on the Tamagotchi Planet. According to her, the Osutchi and Mesutchi characters starting being born when couples began sharing their Tamagotchi pets with each other. As Professor Banzo often get flustered about the concept of love, Mikachu spearheaded the research on them. Since the original "Tamagotchi HOUSE" model was inadequate for caring for a growing Tamagotchi family, Banzo and Mikachu together developed the "Osutchi HOUSE" (オスっちＨＯＵＳＥ) and "Mesutchi HOUSE" (メスっちＨＯＵＳＥ).

The Osutchi and Mesutchi function nearly identical to the original Tamagotchi, but with a few key differences.

While the Check meter is functionally the same as the standard Tamagotchi, the order in which the stats are presented has changed. Hungry is shown first, followed by Happy, then Discipline, and age and weight are last.

The type of food the Osutchi and Mesutchi eats changes for each TMP, and when raising the special characters. The change is only cosmetic.

The game is called "Flag". The Tamagotchi will hold up two flags: a white flag on their left, and a black flag on their right. The user must press the corresponding button (A for white, B for black) when the Tamagotchi holds up the flag. There are five turns, and getting at least three out of five correct is considered a win.

The TMP (TaMagotchi Power) Icon is located as the 8th icon, and appears as a smiling face wearing a crown. It tells which TMP rank the character is in and what generation it has grown to. When two characters of the same TMP breed, the resulting babies will be of the next TMP. If two characters of different TMP breed, the babies will have the TMP of the parent with the lowest TMP.

Generations were introduced as a way of keeping track of how many times the Tamagotchi has married and produced offspring. Generations are counted on the second screen of the TMP icon. This counter begins at 1 in the First Generation, and advanced by 1 each time the adults have children and leave.

The Breeding (ブリ－ド) Icon is the ninth icon, and allows the two units to connect and produce babies. This icon can only be used once the Tamagotchi has reached the adult stage and has aged at least one day. When it's ready to marry, it will dance back and forth across the screen with music playing. From there, the user must interlock the two press and press the B button on both to begin the connection. If the connection is successful, the two units will beep again, and the word "OK" will appear beside them. Pressing the B button one more time will begin the breeding animation.

The two units must remain connected throughout the breeding process. The two babies born will always be the same, and which species of baby is born is determined by what its parents were. Once the animation is complete and the baby has appeared on both units, it is safe to disconnect them.

Sutebotchi and Tsuketchi are the only adults who are incapable of breeding. In addition, Ojitchi and Otokitchi, the two senior characters, cannot breed.

The parents will feed the babies whenever they themselves get fed, but it will be up to the usr to clean the Poo and cure their Sickness. While the parents are around, the babies will get sick 2-3 times a day. After at least two full days have elapsed, the parents will disappear shortly after midnight and the next generation will properly begin.

When the Osutchi and Mesutchi call for attention, they do a special animation where they stand in the center of the screen, facing the user. A harsher, louder sound plays if the pet is calling for discipline, and a unique animation plays if successfully disciplined. In addition, the Osutchi and Mesutchi are more lenient with discipline than other vintage releases in that they will make enough calls in a stage to allow the discipline bar to be filled even if several calls are missed. Certain Tamagotchi will continue to call for discipline even after their bar has been filled, and a Tamagotchi may sometimes start sulking if a discipline call has been missed.

A Tamagotchi may begin to sulk if a call for hunger, happiness or discipline is missed. In this state, it will refuse to eat meals but can be brought out of it if it is fed a snack or a game is won - however happiness will not rise when doing so.

If the user fails to breed the Tamagotchi before it lives out its lifespan, makes a significant number of care mistakes, or allows a character that cannot marry live out their life, the Tamagotchi will die. The death screen during the daytime shows a tombstone on the right with smaller tombstones scattered to the left side. At night, the smaller tombstones are replaced with Obaketchi, whose appearance differs between the Osutchi and Mesutchi. Pressing the C button will show the Tamagotchi's last age and generation before death. Pressing A and C together will produce a new egg.

Press image of the first wave of shells. 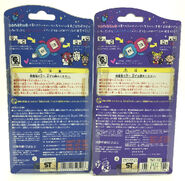 Back of the packaging. 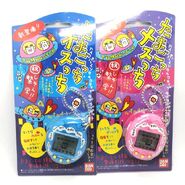 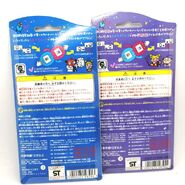