The Tamagotchi P's (たまごっちぴーす Tamagotchi Pīsu) is a Tamagotchi virtual pet device released in Japan on November 23, 2012. Like the previous color releases, it was based on the then airing Tamagotchi! anime series Tamagotchi! Yume Kira Dream, taking place in Dream Town and featuring new characters and locations from there.

The P's is the very first Tamagotchi version to have a slot for an attachable pin, hence the name "Pierce." Various pierces were released, each with exclusive content.

A user by the name of Mr.Blinky has created a patch for the P's which enables users to change the language to English. They have also created downloadable versions of the pierces, including custom ones.

The Tamagotchi P's is about the same size and shape as the Tamagotchi iD L, having the same screen size and hard plastic buttons. The faceplate is clear with gemstones shapes on the left and right of the screen. The printed graphic below the faceplate has holographic gemstone prints in the spots where the gemstone shapes on the faceplate are. Above the screen is a small rectangular slot where the pierce can be inserted. Tamagotchi P's come with a heart shaped pierce that has no content and is just for decoration.

A Tama Deco Pierce (たまデコピアス Tama Deko Piasu), short for Tamagotchi Decoration Piercing, is a small changeable pin similar to a Gotchi Figure on a TamaTown Tama-Go. Each pierce unlocks new characters (or transformations for base ones), games, locations, food, clothing, and items. Tama Deco Pierces also come with two sheets of secret notes that goes into the Tamagotchi P's secret pocket book (sold separately). The notes generally explain the content of the pierces and how to unlock the characters they contain. Only one pierce can be plugged in and active at a time. If a pierce is removed the content for the pierce will stay for some time until it expires and reverts to base content (around 12-48 hours) or another pierce is inserted. If a pierce exclusive character is being raised, the character can be kept until they are married off. However, another pierce is unable to be used until then.

The P's introduces personalities which is a trait that determines what teen and adult characters can be gotten along with care mistakes. The five types of personalities are intelligent, fashionable, charismatic, gourmet expert, and athletic. Personalities can be determined by the meals, snacks, accessories, and toys played which adds personality points to the respective categories. If there is an equal amount of points for two personalities, it will alternate between the two until more points are earned for one or until they evolve into the next stage. If a toddler does not meet the requirements for a specific teen its evolution will be random. If a teen either has no personality or has equal points for multiple personalities, it will generate a random evolution from either all adults obtainable based on the teen and care mistakes (in the case of the former), or all adults for which the requirement has been met (in the case of the latter).

The tamagotchi now keeps a diary where they will record certain events they experienced with a diary entry and picture. Things the tamagotchi will write about include playdates with connected tamagotchis from other devices, going to daycare, going to school, and what they did at their part-time job.

The tamatomo system returns again, this time being renamed as puzzle pieces. Each character (including pierce exclusive ones) has four puzzle pieces to collect and collection of all four will record the character tamatomo in the notebook option. Three of the puzzle pieces are earned by eating a certain food, playing with an item, or putting an accessory on. The last piece is earned by raising an adult character for 48 hours. Collecting character tamatomos in the notebook unlocks new locations and icon backgrounds.

There are two base games that can be played at the Game Center and one that is unlocked at Dream Beach:

There are various locations that can be visited. Some are unlocked when enough character tamatomos are collected.

Once the tamagotchi is an adult, they can work a part-time job anytime from 7 AM to 10 AM by going to the park. To get a certain job, some conditions must be met. When the tamagotchi is sent to work, the user does not have to interact with them or do anything; however, their needs will still drop down at a normal rate. If the hunger or happiness meter goes down to zero the tamagotchi will automatically come home. Each hour worked earns 250 gotchi points and the tamagotchi can be called back from work anytime. If 30 hours are worked at one location a unique outfit, accessory, or toy will be awarded. The available jobs and their conditions are:

Tama Pets return with the same mechanics from the iD L. Different tama pets appear at Flower Bud Park at certain hours and must be encountered three times to adopt them. Adopted tama pets will live in the backyard and follow the tamagotchi when they travel to locations (they will not appear at the location when the tamagotchi arrives). The tama pet will stay until the next generation and will not leave until then.

Adult tamagotchis can meet up with other tamagotchis at Flower Bud Park to go on dates with them. Different characters will appear at certain hours and at the second encounter there will be an option to go on a date. After the second date, the tamagotchi will get the option to marry them.

The P's introduces 4 way device connectivity with various activities and games to do while connected. The two base games are Cooking and Hide and Seek with additional games being available from pierces. Tamagotchis can also visit each other to eat food, take baths, and play together. Additionally, letters can be written and sent between devices when a connection is made and tamagotchis may marry each other.

Like the Tamagotchi iD L, adults do not die if neglected. While younger stages can still die, adults instead run away and leave a goodbye letter explaining why they left and asking the user to take better care of them next time. The departure sequence begins when the tamagotchi has a suitcase next to them. This can be stopped by pressing the clover icon to convince them to stay; otherwise they will leave after some time and the user is forced to restart by pressing A + C together.

There have been special Tamagotchi P's sets which came with a Tama Deco Pierce that could otherwise be bought separately. The P's in these sets (excluding the Love and Melody set) come in exclusive two-color models and have slightly different box art featuring the characters from the Tama Deco Pierce. Currently, all the P's sets only come with character Tama Deco Pierces (not transformation ones).

The Yume Kira Bag (ゆめキラバッグ Yume Kira Baggu) is a toy based on Kiraritchi and Yumetchi's magical bags from the anime series. The bags have a screen inside and come with Dorikawa cards that can scanned in during gameplay. The toy has connectivity with the tamagotchi P's and can send gotchi points earned from winning the games.

The Pen Touch Pocket Designer Notebook (ポケットデザイナー) is a toy based on Miraritchi and Clulutchi's pocket designers from Tamagotchi! Miracle Friends. It has a color touch screen and stylus, similar to a Nintendo DS, though it only registers taps. The user can create and customize meals, snacks, clothes, accessories, items, and wallpapers to send over to the Tamagotchi P's. The toy features games which can be played to earn gotchi points to buy more customizing options and also acts as a personal diary and dictionary for tamagotchi related terms.

The Tamagotchi P's Station is a special big version of the Tamagotchi P's that functioned as a Deka Tamagotchi, offering exclusive items, games, accessories, and locations that could be downloaded to the P's. The P's station could only be found in stores across Japan and the content differed depending on the region and season. The stations also offered unique gameplay such as the option to take care of a giant tamapet by feeding, playing, and dressing them up. There was also an Egg Market option where users could buy and sell other user's items. 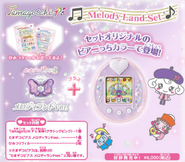 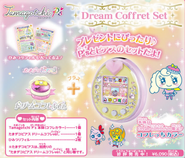 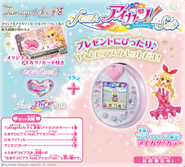 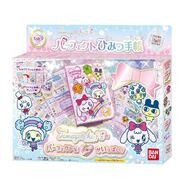 A pink Tamagotchi P's on display

The care screen and explanation of personality & puzzle pieces 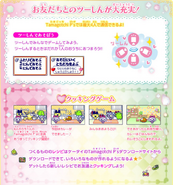 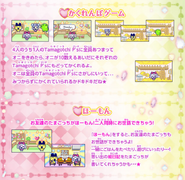 Activities to do while connecting with others

Creation of letters to send through connectivity 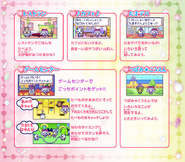 Cleaning the tamagotchi and room

Showcase of a pierce and its contents 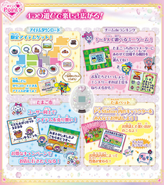