Tamagotchi Pix is a color-screen virtual pet released in mid-2021. It is the first color Tamagotchi to be produced specifically for an international market, and was not released in Japan. The Pix features a camera and touch buttons, which tie into the new gameplay.

The Tamagotchi Pix is roughly the same size and shape as the Tamagotchi On. The top area of the shell is cracked, giving the appearance of a cracked-open egg similar to the removable cap on a Tamagotchi Osutchi and Mesutchi device. The camera is capable of detecting color, which is used in several in-game functions. Instead of the standard rubber or plastic buttons, there are three touch buttons. While they function the same as the standard buttons, they have additional swiping functionality. The front of the shell has printed graphics, with round dots over the touch keys. The top half is a solid color, with the word "Tamagotchi" printed on it, which can be pushed down to take a picture. The back of it features the camera lens. The loop to insert a lanyard is on the left side.

On initial setup of the date, time, and user's name and birthday, the Pix will also prompt the user to select a language, with English, Spanish, French, German, Italian, and Portuguese all built-in.

Close Ups return for adult Tamagotchi characters, and when they come up close, the user can rub their finger over the three touch buttons to pet the Tamagotchi. Doing so will make the Tamagotchi happy.

The user can use the Pix's camera to perform a cooking function. The user will be prompted to take a photo of two different foods, and based on the color of the foods, they will combine into a new food for the Tamagotchi. The user can choose to either store the food in the fridge, or have the Tamagotchi eat the food immediately. After cooking the food, it will be stored in the Recipes section in the Notebook.

Throughout the day, the Tamagotchi will leave poo on the screen for the user to clean up. Upon selecting the option, the user must swipe their finger across the buttons, from right to left, to flush the poo away. Selecting this icon just before it poos will trigger the Tamagotchi to use the toilet instead. Additionally, the bathroom gives the options of bathing the Tamagotchi and cleaning the house with touch controls.

Like the the tree feature in the Tamagotchi Plus Color, the Tamagotchi can plant a seed outside their house and water it daily until it grows a fruit or item. The tree will only produce fruit that can be harvested if it is watered every day. If the user misses a day, the unripe fruit will fall off and cannot be harvested.

The Pix features a total of 11 games. Playing games will earn Gotchi Points, which can be used to purchase items and furniture, or increase the character's happiness. Games are divided into three distinct categories:

By pressing down on the top of the unit, the user can take photographs of what is currently on the screen. When a photo can be taken, a camera icon will appear at the bottom left corner of the screen. The user can take photos of the Tamagotchi's daily activities, as well as activating the camera and taking photos with the camera lens. The Pix can store up to 100 photos before requiring photos to be deleted. Viewing the photo in the album will also give the option of decorating the photos. Photos cannot be transferred between devices or shared online.

Staged photos can be taken at the photo studio where the user can choose a background and position the Tamagotchi in certain spots.

The Pix features a phone which has several options available once the tamagotchi is a child.

Using the Explore option, the camera screen will activate and the user's Tamagotchi will appear on the screen. A character will also appear based on the colors in the camera screen. The two will then play together and the new character will be recorded in the notebook. With this function, a total of 100 characters can be met. Met characters can visit the Tamagotchi's house at 5 PM every day, if the user chooses to answer the door.

The interior of the Tamagotchi's living space can be decorated with different items, and the colors can be customized. Accessories can also be customized the same way. Colors are obtained by taking a picture of an item and after selecting a color. The available colors are red, yellow, blue and white. The user can swipe their finger over the touch buttons to repaint the item. The living room can have two piece of furniture at a time. After an item is created, it will be stored in the Items section in the Notebook.

As the Pix lacks an infrared port, connectivity with other devices is instead initiated through QR codes sent between two units, scheduling a date and time for the two pets to interact. Once the playdate is set, the invited Tamagotchi will automatically leave to go visit the other Tamagotchi's house at the set time. The two will play together for a short period of time and the user hosting the playdate will then have the option to have them cook food together, go outside to explore, or send the visiting Tamagotchi back home. Gifts may also be sent and received through QR codes.

On the Tamagotchi website there is a mission subsection where a simple game can be played. Successful completion of it will reward a QR code for new items and accessories. The prize will change weekly while the mission will change every month. A Tamagotchi will appear at the user's Tamagotchi's house to notify them of a new mission by giving them a letter telling them to go to the website with a QR code leading there.

Upon returning to the Planet, the Tamagotchi may gain a career based on what training games were played. After looking through the photo album, the Tamagotchi will send an egg back for the user to raise, starting the cycle anew.

The Tamagotchi Pix is known to have some minor glitches. 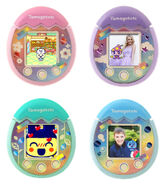 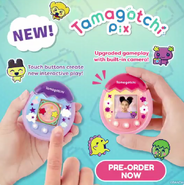 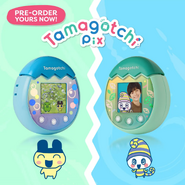 Announcement for preorders of the blue and green shells

Demonstration of the cooking function and life stages

Locations on the Pix 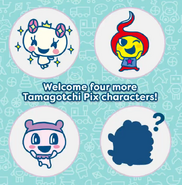 The cast of 24 Tamagotchi Pix characters 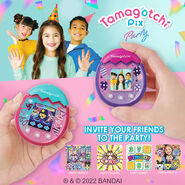 Announcement of the Pix Party

Make Playtime Your Own with Tamagotchi Pix!-2
TV Commercial

Make Playtime Your Own with Tamagotchi Pix!
TV Commercial #2

Introducing the Tamagotchi Pix Party!
Commercial for the Pix Party